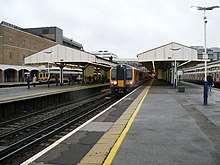 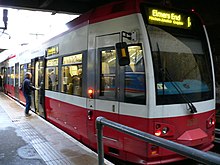 Wimbledon is a major train station southwest of central London , in the London Borough of Merton . It is in the Travelcard tariff zone 3 and also serves as the terminus for one line each on the London Underground and the Tramlink tram . In 2014, 15.30 million subway passengers used the station, plus 19.527 million passengers on the railroad.

The ten-track system is on the South Western Main Line , the main railway line from Waterloo in the south-west of England, and is the hub of other lines. Five tracks serve the fast trains passing through without stopping as well as the suburban traffic of the companies South West Trains and First Capital Connect . On the northwest side is the four-track terminus of a branch of the District Line towards Earl's Court . The tram to Croydon ends at a dead end on the south-east side, right next to it is the Center Court shopping center .

The station opened on May 21, 1838, when the London and South Western Railway (L & SWR) began operations on the first section of their main line. The London, Brighton and South Coast Railway opened the line to Croydon on October 22, 1855. Part of this line had been used by the Surrey Iron Railway from 1803 to 1846 , the world's first horse-drawn railway to serve public transport. On October 1, 1868, the branch line of the Tooting, Merton & Wimbledon Railway (TM&WR) followed to Tooting .

The L & SWR opened the line to Putney Bridge on June 3, 1889 and leased it from day one to the Metropolitan District Railway , the predecessor company of the District Line. Because this section is still legally a railway today, the signals are not looked after by London Underground, but by the railway infrastructure company Network Rail . From August 27, 1905, the District Line trains ran electrically.

At the end of the 1920s, the Southern Railway (SR), the successor to the L & SWR, built a new station building with a station building made of Portland stone , in connection with the construction of the line to Sutton . The new line, the youngest suburban rail line in London, opened on January 5, 1930. On June 2, 1997, Railtrack closed the line in the direction of Croydon in order to convert it for tram traffic. Tramlink finally opened on May 30, 2000.