Balvenie was built in 1892 by William J. Grant, who also founded Glenfiddich . The first firing process took place on May 1, 1893. Balvenie is still today below the Glenfiddich distillery on the slopes of the Convals near Dufftown. If you said in Dufftown "Rome was built on seven hills, Dufftown was built on seven stills", the grants here have played their part twice. There is now a third distillery on the site: the Kininvie distillery, which opened in 1990. The village of Duffton was once founded as Balvenie . The ruins of Balvenie Castle can still be visited today .

In the construction of Balvenie, inexpensive used stills from Lagavulin and Glen Albyn were used . In 1957 the number of stills was increased from two to four, in 1965 and 1971 the distillery was renovated and expanded. First two more were added to the four stills, then one more. The distillery now has nine stills. The water for distilling is still taken from local sources (Robbie Dubh), which Balvenie always had to share with big sister Glenfiddich, as well as the boiler maker, cooper and master distiller David Steward. Only 15% of the malt requirement should still come from our own production. The handpicked, cut and dried peat also distinguishes the little sister from the big sister. However, the first single malt was not bottled until 1973. Until then, the whiskey flowed into the in-house blending .

The water for the Speyside distillery comes from the Robbie Dubh springs. Production takes place with a mash tun ( mash tun ) of 10.2 tons, ten fermentation vats ( wash backs ) made of Douglas fir , four wash stills (two with 12,729 liters and two with 9,092 liters) and five spirit stills of 12,729 liters each, each with internal steam spirals are fired. The steam itself comes from Glenfiddich's waste heat. 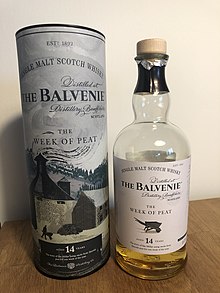