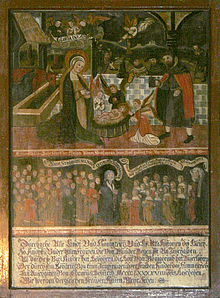 Barbara Stratzmann (* around 1448 ; † 1503 ; born Schmotzer ) from Bönnigheim is said to have been the mother with the largest number of children in what is now Germany at the time of the Holy Roman Empire . This woman, who was called "Schmotzerin" because of her maiden name, is said to have had a total of 53 children with her husband Adam Stratzmann († 1504), but all of them died early.

The “Children's Wonder of Bönnigheim” is presented in written documents. On St. Thomas's Day (December 21st) in 1498 , the notary Friedrich Deumling from Wimpfen recorded the "true history" of the "Schmotzerin" s wealth of children :

"I hereby confess with my handwriting that I have heard such things from this Frawen myself, and so also wrote" .

In the minutes of 1498, Barbara Stratzmann told how the number of her 53 children was composed: According to this, she was pregnant and gave birth 29 times:

19 children were born dead, the oldest child was only eight years old.

Sometime between 1500 and 1525 the late Gothic painting of the Evangelical Cyriakus Church in Bönnigheim was created, which depicts the "Schmotzerin" and her husband with a total of 53 children during the birth of Jesus in the stable in Bethlehem . To the left of the viewer, the father and 38 sons kneel, to the right the mother and 15 daughters. Banners name the year of death of the wife and her husband, a poem praises the wealth of children of Barbara Stratzmann, who had "38 legitimate sons and 15 daughters, born in one marriage for a total of 53" . It also says that in all lands and kingdoms there will probably no longer be such a woman. In 1509, Emperor Maximilian (1459–1519), who was then in Vaihingen an der Enz and Stuttgart, requested a report from the town of Binickheim (Bönnigheim) about the children's blessing of the "Schmotzerin" about which someone had informed him. On June 29 of that year he received the desired answer, the wording of which is known.

Truthfulness of the report

To what extent the representation corresponds to the correctness is unclear. Hermann Krieg, chief physician of the Heilbronn municipal gynecological clinic, contradicted the historical account in an article in Heilbronn's voice (May 12, 1990). He bases his opinion on the statistical occurrence of multiple births , the complications to be expected in the context of multiple pregnancies and the medical conditions at that time, which made survival of the woman unlikely.