This article is about seamanship and knots. For verifiable statements see source of information , for confirmation of receipt of a payment or other service see receipt . 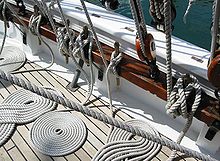 In shipping, mooring means the mooring of ropes on suitable devices, for example on a cleat , a bollard , a clamp or a mooring ring , or in traditional sailing ships on a mooring nail .

Occupy on the cleat

If the cleat is attached vertically, for example on the mast , the head blow must be made on the upper mandrel of the cleat. If it were done at the bottom, it would loosen itself by gravity.

Occupy on the bollard

Occupy on the bollard

If several ships use a bollard, an incoming ship would prevent those already lying from loosening the lines. To prevent this, when mooring with an eye line, the new mooring line is inserted from below through the eye of the existing mooring line and then thrown over the bollard. This ensures that each of the ships can unload independently of the others.

In large ports, ship fasteners are busy fixing the mooring cables of mooring ships to the bollards.

Topping on the curry clip

Various clamping devices have been designed for covering, the best known are the curry clamp and the rope or trap stopper .