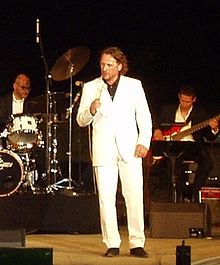 Shepherd rider at the concert in Weißenburg

He was considered the romantic among the three singers. Music has always played an important role in his family, the father played the bassoon and the mother was a singer. His brother Andreas Hirtreiter is also a well-known tenor.

Hirtreiter has lived with the soprano Beata Marti since 1997 , whom he married on November 11, 2006 in the ZDF program Willkommen bei Carmen Nebel in front of an audience of millions. The couple has two daughters: Liliana (* 1999) and Marlene (* 2004).

On November 10, 2006 he released his debut album with Ariola entitled You are love . In 2010 he and his wife released his second album Music Can't Be Sin .