An anatomy atlas is basically nothing more than a picture dictionary on human anatomy .

Image dictionaries printed on paper as well as on new media such as CD-ROM or DVD are nowadays widely naturalized and not only as a pure dictionary, but also aimed at specific target groups , e.g. B. Children , technicians , musicians . 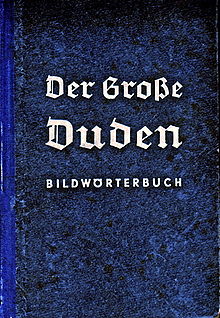 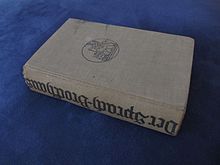 The first German picture dictionaries were published in 1935 . These were Der Große Duden. Picture dictionary of the German language , Verlag Bibliographisches Institut AG in Leipzig, and Der Sprach-Brockhaus. German picture dictionary for everyone , Verlag FA Brockhaus , also from Leipzig. It is difficult to say who came first; Duden writes in the foreword (to the 2nd edition 1958): “Since it was the first work of this kind, it was a global success.” Brockhaus wrote in the foreword: “For the first time this dictionary of the German language brings pictures, explanatory illustrations. Its subtitle 'German Picture Dictionary' wants to express that the picture is not a more or less important ingredient or jewelry, but an equal and necessary part of the whole. ”One disadvantage was and is in any case that a picture dictionary can only represent concrete things.

In the Sprach-Brockhaus, pictures illustrated the words. For the word “bicycle”, for example, there was a picture of a bicycle and explanations, like place names on a map, referred to the details such as “the saddle”, “the chain”, “the pedal”. The concept of the "Bilder-Duden" was exactly the opposite: there was a detailed picture of society in all its structures in hundreds of drawings; here words illustrated the pictures. The details of the picture indicated by numbers on one page of the book refer to the corresponding words on the other page. The bike you just saw could be found in several places in the Duden: detailed as a single image ("Bike and Cycling" panel), but also on other pages, e.g. For example, if the cyclist fell and the bike was wrinkled on the ground (table "Road - traffic accident"). The corresponding sources were then made accessible in a dictionary at the end of the book. The drawings in the pre-war editions of Duden are masterpieces in comparison to the wooden pictures in the post-war editions.

The Duden concept made it possible to publish in other languages ​​fairly easily, and these appeared soon after the German edition: "The English Duden" (1937), "Duden Français" (1937), "Duden Italiano" (1939) and "Duden Español" (1940) ). A Japanese picture dude was announced around 1940 but never appeared. It was more complicated to publish the Sprach-Brockhaus in foreign languages: all pictures had to be provided with new texts and translated. They didn't appear until years after World War II. Also after the war, the nationalized VEB Bibliographisches Institut in Leipzig (later by the publishing house Enzyklopädie Leipzig) published picture dictionaries based on the Duden concept (but with the publishing house Enzyklopädie, not in the Duden series), in the foreign languages ​​of the socialist countries: Russian, Polish, Hungarian etc., later also in other languages.