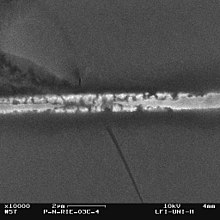 The Black's equation gives the mean time before failure ( MTTF : English mean time to failure ) of a conductive path due to damage caused by electromigration , depending on the temperature and the electric current density at. It can be used to extrapolate the lifetimes of conductor tracks in integrated circuits ( ICs ), which have been tested under the influence of increased temperature and increased current density, to lifetimes under real conditions. The equation was established by James R. Black in the 1960s and is used to this day with some adjustments.

Integrated circuits must be able to function reliably for years or even decades. Computers commonly available on the market should function for 40,000-60,000 hours without failure if possible, and even over a hundred thousand hours in the military sector. It is therefore not sensible to test these under operating conditions and wait for a statistically significant part of the samples to fail. In order to be able to obtain useful information about the lifetime limited by electromigration in the shortest possible time, the experiments are carried out under accelerating conditions. This is achieved by increasing the current density and the ambient temperature. Typical values ​​for the temperature are 175 to 300 ° C. and for the current density j = 10 6  A / cm 2  - 10 7  A / cm 2 . This combination of stress reduces downtime from years to weeks or even days. The lifetime under normal operating conditions can then be extrapolated using Black's equation.

The determination of the failure criterion represents a further difficulty. You can choose a total failure of the line, a certain change in resistance or the short circuit of two adjacent lines.

N tests are carried out with one type of conductor track at different stress temperatures and / or current densities. The downtimes of several tests under the same conditions are roughly logarithmically distributed . Therefore, the mean downtime from the individual downtimes can be t f (i) about

be calculated. Here goes through i all samples from 1 to N .

The following empirical relationship can be found for many metals:

A , n and E A are adjustment parameters, k the Boltzmann constant and T the absolute temperature .

E A can be interpreted as the activation energy of the rate-determining step for the occurrence of the damage.

The exponent n depends on the current density used, the strip temperature (mainly the temperature gradient ), the geometry of the conductor track and the conductor track material. Values ​​between 1 and 7 are found in the literature. In the original form of the equation published by Black, n = 2. This value is to be expected if the nucleation of the damage determines the speed. If, on the other hand, the growth of the damage determines the rate, one expects n = 1.