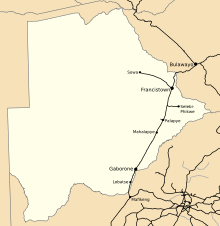 Botswana Railways (BR) is the state-owned railway company in Botswana , which was founded in 1987 by taking over the in-country share of the National Railways of Zimbabwe . It operates a 640-kilometer main line from the Botswana-South African border ( Ramatlabama ) via Gaborone , Lobatse and Francistown to Plumtree in Zimbabwe . Lord Kitchener had this line built in Cape Gauge (1067 mm) during the Second Boer War .

There are three branch lines with a total length of 246 kilometers.

The BR operates exclusively rail freight transport of bulk goods, with coal, copper, soda , salt and meat (in refrigerated wagons of the South African Transnet Freight Rail ) being exported to South African ports and cement, wheat and fuel being imported.

For a long time, a pair of night trains ran between Lobatse and Francistown in passenger traffic, but these were discontinued on April 1, 2009 for economic and safety reasons. In 2016, reconditioned cars were procured from Transnet Engineering in Pretoria , South Africa . They have been providing a daily connection between Lobatse and Francistown and back since March 2016.