Fire simulation systems (BSA), heat acclimatization systems (WGA) and flue gas ignition systems (RDA) (also fire kites) are facilities of the fire brigade or private providers in which the working conditions in the event of fires are simulated.

The primary use of these systems is the training of fire fighters . At average room temperatures of 300 ° C to 400 ° C and up to 700 ° C under the ceiling when simulating flue gas ignition, they learn to deal with the physical and psychological stresses that can prevail in use.

The original heat familiarization system or fire simulation system is merely a system for getting used to the heat of the fire. Extinguishing techniques learned in advance with hollow jet pipes are shown and practiced in practice in the containers. Due to the minimal water consumption when using the spray lance correctly, water damage in real use can be minimized, if not avoided. The participating emergency services experience the stress caused by the heat as realistically as possible. The limits of protective clothing are also shown in order to avoid approaching too closely in an emergency. 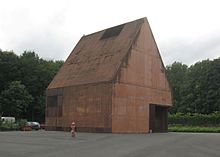 Fire house on the practice yard of the Gelsenkirchen fire brigade

This type of system is fired with wood (mostly old pallets). The temperature, the flame pattern and the smoke development are controlled by opening and closing the container doors. In contrast to the gas-fired systems, however, an emergency stop is not possible here, which means that the instructors here have greater responsibility with regard to safety.

In the gas-fired system, the heat is generated by the controlled burning of liquid gas or natural gas. The advantage here is the better controllability of the fire and the possibility of better regulating the temperature, because the gas can simply be reduced or switched off in the event of a fault or emergency.