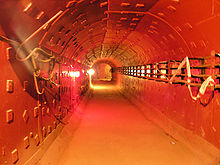 One of the tunnels in the former bunker

The bunker GO-42 ( state facility No. 42 , Russian государственный объект ГО-42 ) is a former military facility in Moscow . Since 2006 it has been open to the public as the Museum of the Cold War ( Музей холодной войны ).

The bunker is located underground at Taganskaya station on the Moscow metro . The entrance to the museum is located at 5-Kotelnitscheski pereulok 11. The facility was completed in 1956 as a command post in the event of a nuclear war and was kept confidential until 1995.

Today the museum comprises four underground tunnels at a depth of over 60 meters with an area of ​​around 7000 m².