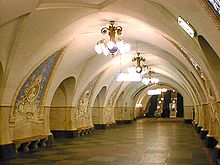 Tag a nskaja ( Russian Таганская ( pronunciation ? / I )) is a subway station of the Moscow Metro on the ring line . It went into operation on January 1, 1950 under the first six stations of the ring line.

Like all stations on the Kolzewaya line, Taganskaya is a transfer station, both to the metro station of the same name on the radial Tagansko-Krasnopresnenskaya line and to the Marksistskaya station on the Kalininskaya line, which opened in 1979 . The Taganskaja metro station owes its name to the historical place name Tagannaja Sloboda , which in turn gives its name to the Taganski district of today and the Taganskaya Square under which the station is located. The current square was built in the 18th century at the intersection of several arterial roads with the earth wall, where the garden ring now runs. Today Taganskaya Square with the three adjacent subway stations is the center of the district. In the immediate vicinity of the train station are u. a. the Taganka Theater and the GO-42 museum bunker ; If you follow Jausa Street (Russian: Яузская улица ) in the direction of the city center, after a few minutes' walk you will reach the confluence of the Jausa River into the Moskva River and there, above all, the confectioner's house on Kotelnitscheskaja-Embankment and the Church of St. Nikita on the Jausa .

The station itself has access from the street, but can also be reached from the two connected transfer stations. The Taganskaja's own entrance is in a vestibule built in 1950, which is adorned with white Wenjower limestone and an arcade-like portico . From the hall of the vestibule, escalators lead to the platform at a depth of 53 meters. From the opposite end of the platform, stairs lead to the transition to the Tagansko-Krasnopresnenskaya line. The stairs leading to the through tunnel in the direction of the Marksistskaya station are on the side in the middle of the platform.

Like all the other ring line stations of the Moscow Metro, Taganskaya was architecturally extremely complex. The vault of the 9.5 meter wide central platform hall is supported by two rows of pylons and closed off by chandeliers . The pylons, clad in white marble , stand out above all because of the upwardly pointed compositions of gilded white majolica ornaments on a light blue background. The motifs of the ornaments revolve around heroic deeds of the Soviet Army and the partisans in the Great Patriotic War and in earlier wars with Russian participation. The center of each composition is a medallion depicting a prominent military-historical personality, the reliefs around it symbolize an army group. The platform floor is made of red and gray granite .

Originally, there was a sculpture composition depicting Joseph Stalin surrounded by children at the point where today's access to the Tagansko-Krasnopresnenskaya line was located . In the course of de-Stalinization , however, this sculpture was replaced by ornaments with a portrait of Lenin and the coat of arms of the Union republics . This composition was also removed when the transition tunnel was built in the mid-1960s.