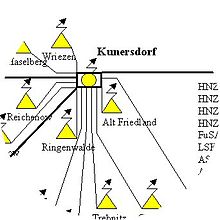 ASS scheme and connection to the Kunersdorf radio station (extract)

The Kunersdorf bunker near Wriezen in the municipality of Bliesdorf in Brandenburg was an element of the covered preparation of the territory of the GDR for a possible war at the main command office of the Ministry of National Defense . The bunker is located west of Kunersdorf . The building shell consisted of two floors in which both the radio and general facilities for operating the bunker were installed. In addition to the radio transmitters installed in the bunker , a further eleven remote transmitter stations (ASS) were built in steel tanks with a post-typical superstructure, also known as "Sputniks", on an area of ​​approx. 400 km² in the vicinity of Kunersdorf. The bunker was completed and put into operation in 1982.

It is listed under the designations Object 17/448 (payload), Funkendezentrale, Frankfurt (O) - 448 or ZSTM (central point for touch and modulation lines).

In accordance with its function and tasks, it represented the remote radio transmission center of the main command post of the Ministry of National Defense , was geographically approx. 12 km east of Harnekop, south of the city of Wriezen.

The site was initially used as refugee accommodation. Today the entire area of ​​the bunker facility has been privatized and is looked after by the non-profit association "Förderverein Rüsterbusch Kunersdorf 2008". The facility is to be preserved as a Cold War memorial and as a technical monument.

The bunker has been open to the public since June 30, 2011 and can be visited on fixed dates.