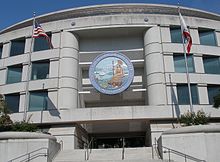 The California Public Utilities Commission (CPUC) is the regulatory agency for public utilities in the US state of California . Under California law , this group of companies includes electric utilities , telecommunications companies , natural gas utilities , and water utilities . In addition, the CPUC regulates companies in the transport sector such as airlines , moving companies and passenger transport companies (such as limousine service ) and companies that offer safety technology for level crossings . CPUC is headquartered in San Francisco , with branch offices in Los Angeles and Sacramento .

The agency also controls and administers programs of the state of California, with which the energy saving and renewable energies are to be promoted, so in particular the California Solar Initiative .

The California Solar Initiative (CSI) is an incentive program for the promotion of solar energy in the state of California. This will provide 2.167 billion dollars between 2007 and 2016 to promote solar power generation. This should also generate a capacity of 1,940 megawatts of solar power. The supplementary program CSI-Thermal should lead to the installation of 200,000 solar thermal systems between 2010 and 2017 with 250 million dollars .