The Cantor pairing function (sometimes also numbering function) is a mapping used in theoretical computer science , among other things , which is based on Cantor's diagonal argument .

It can be used to represent any pair of natural numbers by a single natural number . This is used to number all pairs of numbers. This numbering is even clearly reversible. This means that you can determine the original pair of numbers from the number . Mathematically speaking, this means: Cantor's pairing function is a bijective total function .

The idea of ​​diagonal counting of the set of all pairs of natural numbers goes back to Georg Cantor . The generalization of Cantor's pairing function from pairs to tuples is called Cantor's tuple function .

The tracing of a problem back to a (possibly simpler) known problem is a proven proof technique known as reduction .

It may not be immediately apparent that it is possible to encode any combination of two numbers by one number: the set of all pairs of numbers seems to be much larger than the set of all numbers .

The Cantor pairing function shows, however, that both sets are equal, because it creates a 1: 1 relationship, it is a bijection .

The Cantor pairing function is defined as

where one lets the natural numbers start at 0.

Here is a sketch of the diagonal counting : 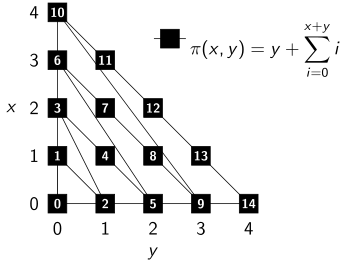 The two values ​​are plotted on the axes, as in a distance table you look up the value of the Cantor pairing function at the point of intersection, for example .

You can read off the above law of formation directly if you visualize the summation in each case using a column.

Tuples can also be clearly numbered through repeated use . One defines inductively for the functions

using the pairing function by:

The Cantor pairing function is reversible . The reverse is clear and predictable. The latter is important for the application in theoretical computer science, since the calculability of the function and the inverse function is a condition in order to represent all calculable functions by single-digit functions without problems.

Reversible means that one can deduce the two numbers and for which applies from a number . The inverse function consists of two auxiliary functions and :

Their inverse is written component-wise as , where:

by virtue of projection

which selects the -th component from a tuple of length .

In the case of pairs (the case ), write and , so that the inverse of the pairing function can be written as.

With the auxiliary functions ( triangular number )

you can and as follows for calculating:

Which pair of numbers does the number 17 represent?

To do this, you first determine the greatest natural number for which applies. This can either be determined by trial and error (the table of values ​​from ):

or using the rounded formula of the triangle root:

Now you can use:

So this can be easily verified using the sketch above.

Implementation of the calculations in Java

With large values ​​of , the time required by the WHILE loop increases enormously, so no loops were used and the variant with the triangle root was implemented instead:

The method compute calculates the number assigned to the transferred pair of numbers (x y) , computeX and computeY are the inverse functions of compute.

Pascal program to calculate the inverse

The Cantor pairing function is a total , bijective , calculable (even primitive-recursive ) function, so its inverse is also calculable.

Proof of the predictability of the Cantor pairing function

One way to prove that a function is computable is to provide a register engine that computes the function.

This machine you have to register in the function parameters and the register passed. The value of is then obtained in the output register at that point .

There is no formal proof that the register machine actually calculates the function: This is obviously recognizable when one compares the functional rule for calculating the Cantor pairing function with the machine.

Proof of the computability of the inverse function

For the proof of the inverse function, it is advisable to use another definition of computability:

A function can only be calculated if there is a WHILE program that calculates this function.

The Pascal program given above can be refined into a WHILE program. So there is a WHILE program that calculates the inverse function. Thus, the reversal can also be calculated.

exactly when there is a calculable function with

The idea comes from Georg Cantor's set theory . He had the idea of comparing the size of one set ( cardinality , cardinality) with the size of another set by trying to find a 1: 1 mapping ( bijection ) of this set with the other set. Exactly one element of the second set should be assigned to each element of the first set and vice versa. This seems complicated, but it is justified when it comes to sets with an infinite number of elements. See also Galileo's paradox .

With a diagonal counting (as indicated above) it is easy to show that with a countable set the Cartesian product is equal to , which perhaps speaks against intuition, since tuples of different dimensions occur here.

For two neighboring points and on the trajectory of the inverse function can be arbitrarily large, which can be undesirable when using the counting. Therefore, one also considers a variant of Cantor's enumeration, in which always applies and which is continuous in this sense. This form is called the Boustrophedonian Cantor counting, because here the path does not jump from the -axis to the -axis (as shown in the sketch above), but rather turns towards the axes. It is described on OEIS as A319571 .

There are many other ways to bijectively encode pairs of natural numbers by a natural number, e.g. B. one can count in a spiral with the formula :

The simple formula also provides a bijection between and :

Proof of reversibility: is the greatest natural number such that is a divisor of , i.e. the number of factors in the prime factorization of . Be . Then is .