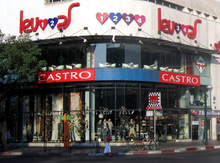 Castro is an Israeli fashion chain. It is in direct competition with the fashion chains H&M , Zara and Mango .

The fashion chain was founded by Aaron Castro (born in Thessaloniki ). In 1933, Aaron Castro and his family moved into what was then the British mandate of international law in Palestine, now Israel. A short time later, his mother opened a small boutique in Tel Aviv and employed 15 seamstresses. After serving in the army in the 1950s, Aaron Castro followed in his mother's footsteps and opened a small corner shop in Tel Aviv. His mother Nina was employed in his shop. The company began to grow more and more into a small factory.

In the 1970s, Castro flew to various fashion fairs around the world and bought new designs that he linked to Israeli. After 1985, Castro decided to focus on the Israeli market and to see retail as a core business of his company in the future. Castro stores opened all over the country and the fashion chain grew rapidly. In the 1990s, the fashion chain recruited numerous young Israeli designers, imported fabrics from overseas and had the clothes presented by well-known supermodels.

Castro has been equipping his country's Olympic team since 1996. In August 2000 the collection was expanded to include men's clothing.

As far as internationalization is concerned, Castro is still at the beginning. In Israel , Castro is the market leader with almost 90 stores. Only in Russia , Cyprus and Switzerland does Castro still have a few stores. Castro Mode has several branches in Russia, Romania and Ukraine. Castro has two branches in Switzerland. The Dutch department stores V&D have also been supplied since August 2008.

Germany is the largest market to date that the Israeli chain has targeted. For this reason, it was decided to work with the Otto Group (50 percent stake in the Castro Germany joint venture ). The Otto Group already had a stake in the market launches of Zara and Eddie Bauer and thus has experience.

Since 2007, shipping to the individual branches has been carried out by the Dutch TNT Fashion group in Oldenzaal. At the moment Russia, Romania, Germany, the Ukraine, Switzerland and the Dutch department store V&D are supplied.

The Israeli fashion chain is valued at $ 80 million. Internationalization is expected to generate a surge in growth. The turnover achieved with clothing, lingerie and accessories was around 70 million euros annually in 2003/2004.

The company founded by the Greek immigrant Aaron Castro has been listed on the Tel Aviv Stock Exchange since 1992 and has increased its price significantly. Castro Model Ltd. is still about 64 percent in family hands, the rest is free float. The sales area amounts to well over 10,000 square meters (figures at the beginning of 2005).

After Castro designers discover new trends, only rough drafts are drawn initially. Then the necessary fabrics are ordered. Since the fabric deliveries take the longest time, this should give them a time advantage. The final design of the clothes is then determined very late, when reliable information about current trends comes from the stores. It usually takes four weeks from the drafts to the sale in the store.

The designs are designed in Israel, manufactured in the Far East, Israel and the Mediterranean region.