from Wikipedia, the free encyclopedia
This is the spotted version , flagged on May 31, 2018 . There are still template and file changes that need to be viewed.

Chřibský hrádek , also Karlštejn (German: Unterer Karlstein , Wüstes Schloss ) are the remains of a rock castle near Chřibská ( Kreibitz ) in Bohemian Switzerland in the Czech Republic .

Chřibský hrádek castle is located on a boulder in the Doubický potok ( Daubitzbach ) valley not far from the single Hegerhaus Hájovna Saula (also U Sloupu ), which today houses an information point of the Bohemian Switzerland National Park. To the north is the small community of Doubice ( Daubitz ), to the east is the town of Chřibská.

The history of the small castle complex is unknown due to the lack of written sources, and the originally valid castle name has not been passed down to this day. It was probably built by the Michalowitzers as a guard castle on Alte Prager Straße - a medieval trade route between Saxony and Bohemia . Based on recent archaeological finds, the complex was abandoned in the first half of the 14th century. After the Michalowitzers, from 1406 the area belonged to the Berken von Duba and from 1428 to the Wartenbergers , among whom it was severely affected by the fighting of the Upper Lusatian Six-City Association between 1440 and 1445 . So unless the castle was abandoned in the 14th century, it certainly did not survive these events. 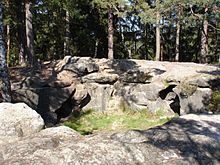 Carved room on the castle rock

Overall, the area of ​​the castle takes up an area of ​​about 50 × 50 meters. The wooden main building of the castle was once located on the boulder. Today a carved cellar room and some beam supports can still be found on the boulder. At the foot of the rock, the remains of a small bailey with two neck trenches can still be clearly seen in the area.

Paths to the castle

A good starting point is the information point of the Bohemian Switzerland National Park in Hájovna Saula. From there, the castle complex can be reached in about five minutes on the signposted path. The ascent to the castle rock is possible on a narrow path.

See also : List of castles and palaces in the Czech Republic