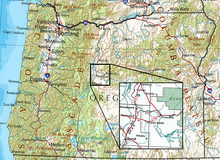 Location of the COPR in Oregon

The City of Prineville Railway (COPR) is an American Short Line - Railway Company in the state of Oregon . The company is based in Prineville . Built from 1916 to 1918, the 29.5 km long line belongs to the city of Prineville and is the longest-running railroad owned by a community in the United States. It creates the connection between Prineville Junction and Prineville.

The railroad was built after the major railroad companies Union Pacific Railroad and Great Northern Railway failed to connect the city to their network. In the 1950s and 1960s, railroad income was so high that the city had one of the lowest tax rates in the United States. Regular passenger traffic ceased in 1939. Since the last two large sawmills were closed in 2001, the transport volume fell dramatically.

The majority of the goods transported are wood and industrial goods. The administration is carried out by a commission appointed by the city council. The company has four locomotives and 182 freight cars. A locomotive is a three-axle Shay type steam locomotive owned by the Oregon Historical Society and used on special occasions.

In Prineville Junction there is a connection to the route network of the BNSF Railway and the Union Pacific Railroad.