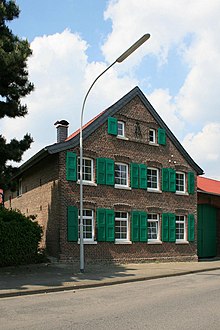 The residential building Corresburger Weg 5 is in the Schelsen district in Mönchengladbach ( North Rhine-Westphalia ).

In the center of Schelsen, the two-storey, transversely closed residential building is located within a four-sided, non-closed courtyard . The original half-timbered construction is only visible on the long wall on the courtyard side. In the 19th century (1877), brick facing was placed on the gable-side street front and the outer long side. The street front is structured by four evenly arranged window axes ; all windows uniformly rectangular, terminating with arched lintels. The two windows in the gable are smaller. Above the entrance door on the courtyard side there is an inscription dating 1792 May 1st, the couple Matthias Rath and Margarethe Kaulen had this house erected .