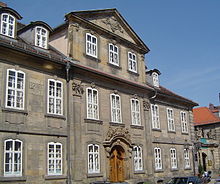 The window apron is a decorative element of a window in the lower parapet field . It is one of the decorative elements on stone houses of the baroque and classicist architectural style to design the building facade together with finely profiled cornices , eaves , window frames and elaborate portals. In the 18th and 19th centuries, this architectural style can be found almost exclusively in stately homes and upper-class townhouses. 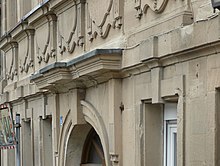 There is also a regional specialty in the Bayreuth district . Many types of window aprons also developed here in rural town houses and farmhouses:

There were two major fires in the Weidenberg market in 1750 and 1770, in which large parts of the market were destroyed. The Bayreuth Margrave Friedrich commissioned his building inspector Johann Gottlieb Riedel with the reconstruction. He took town houses in the city, which are attributed to the French builder Joseph Saint-Pierre , as a model. For reasons of fire protection, the fine sandstone from the Bayreuth area was used as a building material . This was inexpensive and relatively easy to work on. He also allowed the stonemasons to use the finest decorative shapes.

Farmhouse in Heßlach with window aprons

The transition from the half-timbered houses to the fireproof stone houses was also facilitated by the fact that in 1769 the seat of government of the margravate was relocated from Bayreuth to Ansbach . That meant the end of the artistic hustle and bustle, which experienced a cultural high point under Margrave Friedrich and his wife, the Prussian king's daughter Wilhelmine . The result was that the craftsmen, especially bricklayers and stonemasons , had to look for new fields of activity and therefore turned to mundane house building. Baroque style elements of the Bayreuth town houses were carried on to the rural district's farmhouses via the Weidenberg stone houses. This facade decoration on rural stone houses is probably unique and can only be found in this distinctive form in the Bayreuth area. Occasionally and depending on the region, this architectural style is also referred to with the generic term peasant baroque .

If one looks at the window apron ornaments in the period from 1750 to 1860, one can see a development of the motifs from initially simple forms to sculptural decorative elements. It looks like a competition between the building owners for the most beautiful window apron has developed.

In the book Phenomenon window aprons by Fritz Angerer and Richard Zühlcke the time steps in the development of window aprons on farmhouses in the district are shown.