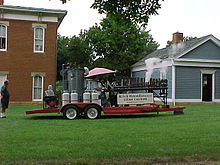 The steam organ , also called Calliope (after the muse Kalliope ), is an organ whose pipes are operated not with air , but with steam. It is still counted among the aerophones .

The pressurized gas steam is generated by boiling water, for example in a gas-fired steam boiler and, apart from a possible feed water pump, without mechanical pumps or fans. If air is sucked in with the high-pressure steam jet by a jet pump , the energy efficiency can be increased, but the heat of evaporation of the steam through it is definitely lost. At the same time (partial) condensation of the steam occurs, which makes the organ playing also visible at the openings of the blown pipes by expelling fumes (steam).

In 1855 the inventor Joshua C. Stoddard received a patent on the instrument. It was initially planned to install it as a “steam-powered carillon” on church towers. Because of the very high pressure and volume, steam organs are usually only used outdoors, for example at fairs and excursion boats. In the 19th century there were repeated accidents due to instrument explosion. The largest steam organ had 44 pipes.