The German Professional Association for Nursing Professions e. V. ( DBfK ) is an association that represents the general obligations of occupation moral and economic interests of the self-employed or dependent employment professionals in the elderly , Kinderkranken- and nursing and public health . The association is divided into a federal association and for the area of ​​individual or several federal states into four regional associations with the legal form of registered associations .

Today's DBfK was founded on January 11, 1903 as a professional organization for nurses in Germany (BOKD) by nurse Agnes Karll , who has had an intense impact on nursing in Germany. In addition to founding the professional organization, she was also instrumental in founding the International Council of Nurses (ICN) in 1904 , in which the DBfK is still actively involved today. The idea of ​​founding a professional organization came to Karll in 1901 after attending a general assembly of the General German Women's Association , at which 80,000 women negotiated the nursing profession . At the time of the General Assembly, nursing with no ties to a motherhouse was seen as a desecration of nursing. However, Karll herself worked as a freelancer due to her family obligations.

During the meeting, a superior of the Red Cross had a say, who regarded nursing care without a motherhouse connection as unacceptable and impracticable. Agnes Karll, convinced of the opposite, then worked on the implementation of her idea of ​​working as a freelance nurse. On January 11, 1903, she discussed the proposal she had developed for a statute at a meeting to found an association with 37 sisters in Berlin. On the same evening, 28 of the women present founded the professional organization of nurses in Germany . Agnes Karll was elected first chairwoman. In addition to other goals, it was initially the primary goal of the association to enable the sisters to be independent and to enable the members to “empower participation and responsibility”.

According to the association chairmen, the First World War should further enhance the position of the sister. Despite the fact that there was an enormous need for personnel, this hope turned out to be deceptive: emergency exams, shortened training times and reduced requirement conditions almost ruined the work of the BOKD. The social composition of the nursing profession changed drastically as a result of the war. Not only women from “educationally disadvantaged classes were added, but also numerous male nurses, paramedics from the ranks of the workers and craftsmen”.

The association in the time of the National Socialists

When the National Socialists came to power, the BOKD also initially placed itself in the service of the regime. The National Socialist leadership followed the development of the professional organization with great interest. Above all, the international contacts seemed suitable to the new rulers to advertise the new government on this stage as well. But as early as June 1933, the association's own magazine “Unterm Lazaruskreuz” was renamed by order of those in power and was henceforth called “Service to the People”. "The BOKD only designs the cover of the sister magazine."

The freelance sister associations saw themselves as a newly formed umbrella association in the Reich Student Council of German Sisters . The premises and equipment of the BOKD were taken over by the Reich Ministry of the Interior. In the following years, the BOKD was able to avert the dissolution, which was repeatedly demanded, through the advocacy of various National Socialists and with reference to international contacts. In April 1938, on top orders at a general assembly, the dissolution of the professional organization was decided by a unanimous membership resolution.

Since the professional organization was not deleted from the register of associations, it was possible in 1945 through a simple revocation of the dissolution resolution from 1938 to found the Agnes-Karll Association as the successor organization to the BOKD. The goals of the old professional organization could be taken over almost unchanged, but under the current conditions they still represent a requirement for the work of the organization. However, the organizational structures of the old BOKD could not be taken over, since the victorious powers were not uniform, centrally located in Berlin controlled associations. In the Soviet occupation zone , membership of the Agnes Karll Association was even considered illegal and was prosecuted.

In the west, as a result of the requirements, the Agnes-Karll-Verband developed as a professional interest group at the state level, initially without a central link. In 1951 a main board was formed to represent the interests of the Agnes-Karll Association towards the federal authorities. Contact with the international care associations was restored as soon as possible.

Starting in the 1950s, the independence of the nurse became an important keyword in the professional policy discourse of the nursing associations. The outdated ideal of traditional, serving nurses and association officials came under fire from young sisters. Despite improved training and working conditions, a problematic staff shortage and lack of young talent developed.

In May 1991 the professional association changed its name to Deutscher Berufsverband für Pflegeberufe eV while retaining the well-known abbreviation DBfK . With the name change, the organization took into account a wish of the elderly and child nurses already admitted to the association, to meet the opening of the association for these care professional groups in the name. The abbreviation was retained due to its popularity. 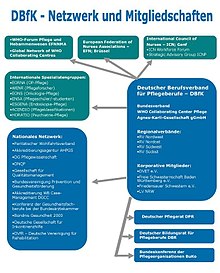 Network and memberships of the DBfK

The magazine Die Sister, Der Pfleger is an official organ of the DBfK.

In its function as a representative of the interests of members of the nursing professions, the DBfK is active in a broad network of international nursing and health organizations in addition to a national network within and outside the association.

An online lexicon Pflegewiki founded in 2004 has been under the patronage of DBfK since March 2013. It is currently (June 23, 2018) unavailable.