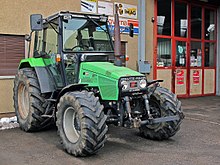 The AgroXtra is a tractor manufactured by Deutz-Fahr that was on the market from 1990 to 1996.

The AgroPrima, AgroXtra (also as Plus Power) and the AgroStar still belong to the DX series , accordingly largely the same components as in the DX series were used, with only gearboxes from Deutz being installed. The front axles came from Sige. The AgroXtra series has been supplemented by the AgroStar series in terms of both performance and equipment .

The AgroXtra was built for the first time with a clear view hood, a hood sloping sharply towards the front. This was possible because the Deutz diesel engines used were air-cooled and were therefore smaller than water-cooled engines. The cabin corresponded to the StarCab of the DX series, which offered a good all-round view due to its shape and the many glass surfaces.

The Agro series is the predecessor of the Agrotron series , which it replaced in 1995.

The one millionth Deutz tractor since Deutz began building tractors in 1926 was an AgroXtra manufactured in 1992, which was painted silver gray.