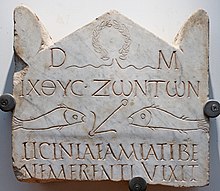 According to the results of the investigations by Santoro, it did not appear before the time of Augustus and was only in general use in the post-Augustan period, then also in an abbreviated form.

The formula can appear as an inscription without any further addition and then generally designates a place as a grave site, but as a rule it only forms part of a grave inscription with the name of a deceased person, mostly it is then at the beginning, sometimes followed by the name of the deceased or placed at the end of the inscription, and in individual cases the letters D and M appear separately to the left and right above the name inscription.

The pagan formula, according to its origins, also appears in abbreviated form in inscriptions for Jewish and Christian deceased, whereby those for Christian deceased sometimes also have Christian formulas or Christian symbols, while with allegedly Jewish DM inscriptions mostly only from the name or location and only in comparatively few cases are it possible to draw conclusions about religious affiliation from an addition to a name such as Iudea . Attempts have been made to explain this finding in such a way that the formula has become incomprehensible, syncretistically appropriated or reinterpreted as Deo Magno or Deo Maximo , or that it could have been gravestones or tombstones with a prefabricated inscription. In some cases, by placing the formula on the back of the plate or on the basis of processing marks, Rutgers was able to make plausible that a plate previously used as a pagan was reused for a Jewish deceased.