Dmitri I of Pereyaslavl 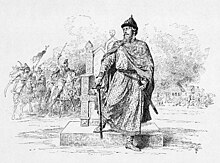 Dmitri I of Pereyaslavl

Dimitri I , also Dmitri Alexandrowitsch Perejaslawski ( Russian Дмитрий Александрович Переяславский; * around 1250; † 1294 ) was a son of Grand Duke Alexander Yaroslavich Newski and was appointed Prince of Novgorod by him in 1258 .

After the death of his father, he was stripped of this title by his subjects. After his successor Yaroslav III. died, however, he got the principality back. After the death of Grand Duke Vasily Jaroslawitsch in 1276, Dimitri I ascended the grand ducal throne, but found a bitter enemy in his brother Andrei (II) and was driven out by him with the help of the Tatars . He later regained the throne and asserted himself under constant hostility.