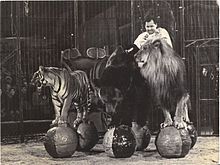 The Russian trainer Iwan Fedotowitsch Ruban (1913–2004) has a bear, a tiger and a lion balanced on balls. 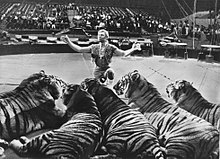 Gunther Gebel-Williams with his tigers performing at the Ringling Bros. and Barnum & Bailey Circus (1969)

A tamer ( borrowed from French ; to tompter , "tame, tame") is a showman who trains wild - i.e. non- domesticated - animals such as lions , tigers , bears or even elephants to perform tricks and demonstrates them to the public in the ring .

Most animal trainers travel with a circus , some also find engagements in variety shows ; Until the early 20th century, zoological gardens also offered such shows more frequently. Unlike dressage acts with dogs, horses or goats , the entertainment value of a tamer draws its entertainment value not only from the dexterity and possessiveness of the animals, but from their dangerousness. Despite all apparent domestication and routine, wild animals remain unpredictable in their behavior; Experienced tamers are repeatedly attacked or even killed by their animals.

In Germany, animal trainers, trainers and other people who are involved in the keeping, training and use of animals in circuses or similar institutions have been organized in the professional association of animal teachers since 2007 ; Unlike the zoo keeper , however, “animal teacher” is not a state-recognized profession .