from Wikipedia, the free encyclopedia
This is the sighted version , flagged on July 22, 2021 . There is 1 pending change that has yet to be viewed. 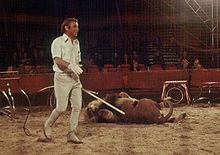 After fleeing in World War II , his family ended up in Hamburg . Although he grew up in a middle-class family, he was attracted to circus life, and he joined Circus Williams in May 1946 without the family's knowledge, but returned in winter. In 1948 he was able to get a job at the Circus Barum , first as a prop master , later as a zoo keeper , then as a jockey . In 1952 he stood for the first time as a tamer in the ring. His career led to various circuses, since 1962 he worked with his own animals. Because of his fame, he has appeared in documentaries and television series such as Jens Claasen und seine TiereWith. He was once a guest at Ed Sullivan's in the USA.

In 1956 he married the artist Inge Bielewski, whom he had met at the Danish Circus Benneweis. In 1970 they bought the material from Circus Barum, which had been closed in 1968, and founded their own Circus Safari . In 1971, according to their own statements, they acquired the unrestricted rights to the name Barum. The name of the circus was first changed to "Barum-Safari", later to Circus Siemoneit-Barum, Barum was added to the surname Siemoneit. Inge Siemoneit managed the business administratively, while Gerd Siemoneit-Barum concentrated entirely on the training of his predator groups, went on safari and participated in television. During her husband's illness in Italy, Inge Siemoneit performed with the group of lions. She died of liver disease in 1974.

In 1975 Siemoneit-Barum married Rosalind Early, a British actress, dancer and singer, with whom he has two children: Rebecca (* 1977) and Maximilian (* 1982), who sometimes appeared as a comedian. After the end of 2002, Siemoneit-Barum no longer appeared as a tamer; he gave his animals to the Serengeti-Park Hodenhagen. His successor until the end of 2006 was the Englishman Alexander Lacey, who was engaged in the Charles Knie circus from 2007 to 2011 and since 2012 in the largest circus company in the world, namely Ringling Bros. and Barnum & Bailey Circus in the USA. On October 26th, 2008, Siemoneit-Barum stood for the last time as circus director at the Circus Barum in the ring, it was also the last performance of the circus, which was not continued.

After Siemoneit-Barum suffered a stroke in the spring of 2020, which affected him physically but remained mentally fit, he died on July 20, 2021 at the age of 90 in his house in Einbeck.