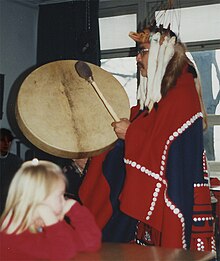 Ed E. Bryant in traditional dance costume at an event in a youth center in Wuppertal

Ed (Edward) E. Bryant (* 1961 ) is a Canadian artist from the Tsimshian tribe who continues the traditional art of the Northwest Coast Indians . His Indian name is Hagwil-Gaa from the Gitando raven clan.

Bryant grew up in the Tsimshian fishing village of Lax Kw'alaams (formerly Port Simpson) on the northwest coast of British Columbia . Shortly after his birth, he was adopted by his grandparents because his alcoholic father and his disabled mother could not take over custody. In particular, his grandfather taught him about the cultural heritage of his tribe - values , history, religion, medicine and language that have deeply shaped his personality. Ed Bryant openly professes a belief between Christianity and the traditional religion of his tribe.

In the famous carving art of the Northwest Coast Indians, which he does exclusively by hand, Bryant has developed into one of the most outstanding artists since the 1980s. He works mainly with red and yellow cedar, birch, maple and yew wood. But bones, ivory, copper and silver are also used. The objects of his artistic work are in British Columbia - like a nine-meter-high totem pole in Prince Rupert , but also in European museums, galleries and private art collections. In Geneva , a three-meter tall totem pole is in his hand.

Ed Bryant has lived with his German wife in Bensheim, Hesse, since 1998 . In Germany he often appears at museum events in order to bring visitors closer to the Tsimshian culture with his art, but also at lectures and seminars and with music and dance in traditional garb. His particular concern is to show people how the culture of the Northwest Coast Indians differs from that of the clichéd Plains tribes with tipi and feather hoods. Among other things, he has performed in the Linden Museum in Stuttgart, the Adelhausermuseum Freiburg, the Neanderthal Museum , the Dahlem Museum Berlin and the ethnological museums of Frankfurt and Heidelberg. Bryant regularly spends several months of the year in his homeland and takes an active part in the political life of his people.