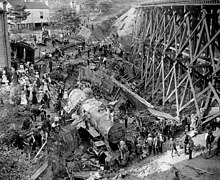 Photo of the accident

The Old 97 was a train of the Southern Railway , which on the route from Monroe in the US state of Virginia to Spencer in North Carolina perverse and on 27 September 1903 at Stillhouse Trestle near Danville accident.

The Southern Railway had a contract with the US Mail which included a penalty for delays. That day, the train coming from Washington was already an hour late. Engine driver Joseph “Steve” A. Broady therefore received strict orders in Monroe to bring the train to Spencer on time. A planned stopover in Franklin Junction has been canceled. The route to Danville was characterized, among other things, by a number of difficult bends, which were also designated as slow driving areas. At the transition from a curve to a bridge over Cherrystone Creek, the train jumped off the track and fell into the depths. The engine driver knew the route from earlier journeys with freight trains and, according to traditional statements made to colleagues, was also aware of the problematic bridge. It was his first ride on a light mail train .

In the area of ​​the bridge, signs restricted speed to 15 miles per hour (mph). The bridge was technically designed for 25 mph. The train actually drove at around 50 to 60 mph. The cause of the accident is believed to have been a failure of the brake due to insufficient air pressure and breakage of the tire on the center drive wheel as a result of excessive speed in the curve. The insufficient air pressure resulted either from a defect in the air pump or from a regeneration time that was too short after previous braking maneuvers. In the run-up to the accident, the train driver may have misjudged the significantly poorer braking behavior of the four-car train compared to freight trains. At the time of the accident, the train had only caught up two minutes late.

The train crash inspired some songwriters . On August 13, 1924, Vernon Dalhart played the title Wreck of the Old 97 / The Prisoner's Song (based on the melody of The Ship that Never Returned ), from which another nine versions were created for other record companies. The B-side The Prisoner's Song reached first place on the US charts after the single was released on October 3, 1924 . The single is often referred to as the first million seller in the American music industry and thus the first million seller in country music . The song was later recorded by various other artists such as Flatt & Scruggs , Johnny Cash , Hank Snow and the Seekers . The Texan country band "Old 97's" also named themselves after this song.

Pacific Data Images (today: PDI / DreamWorks SKG ) were also inspired in 1989 by this incident during the creation of Locomotion (Steve Goldberg), one of the first CGI shorts (3D computer graphics short film); Child-friendly, however, the little "Locomotive # 9" eventually overcomes the damaged bridge and reaches its destination on time.