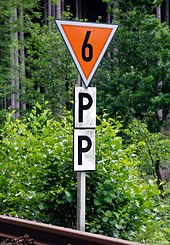 Announcement of a speed limit stop (60 km / h), with double whistle board

A speed limit stop is a section of track on a railway line that may not be used at the maximum speed permitted for this section of the line. Slow speed areas are usually announced and limited by slow speed signals (Lf). A distinction is made between temporary and permanent slow speed areas , which are treated differently and signaled differently in different companies. Temporary speed restrictions are announced in the weekly compilation of temporary speed restrictions and other special features ( La ) according to a special mailing list. The permanent speed limits are already incorporated into the timetables with the corresponding speed information. They are set up by the railway infrastructure company . 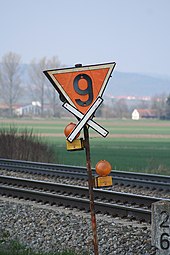 A repealed or not yet implemented 90 km / h speed limit stop, marked with a crossed out signal Lf 1 with code number 9

Temporary speed limits are set up if the condition of the route or a building makes it necessary to reduce the speed, for protection or in the wake of building sites or for other operational reasons. The locomotive staff are usually made aware of these points by means of an announcement in the La , the weekly updated compilation of the temporary speed limits and other special features , as well as on-site signaling. The signals Lf 1 slow travel disk , Lf 2 start disk and Lf 3 end disk are used for the latter . The slow speed disc is in the braking distance in front of the start disc and bears a code number that indicates the tenth part of the speed in km / h that must not be exceeded from the start disc to the end disc. If the signal is missing, the driver receives a written order instead . If a temporary speed limit stop is canceled prematurely, the Lf signals are often not initially removed, but instead marked with invalid crosses in order to explicitly signal the cancellation (possibly contrary to the information in the La). The example image shows such a crossed out Lf 1.

According to the company's own information, there were 72 slow speed zones on the Deutsche Bahn rail network on February 1, 2015. This includes all speed restrictions caused by defects and officially ordered, but not temporarily speed restrictions due to construction. In the 2014 financial year, the delays due to temporary slow-speed sections (excluding construction-related slow-speed sections) totaled 3712 hours. This corresponded to a value of 13.2 seconds per 1000 train kilometers driven.

From January 1 to November 30, 2018, there were a total of 485 defective or ordered speed restrictions in the Deutsche Bahn network. An average of 92 days passed between setting up and removing a speed limit stop.

Critics complain about the number of speed limits in the network of Deutsche Bahn. A study carried out by Netzwerk Privatbahnen in 2005 showed an increase in the number of slow speed zones in Bavaria and Baden-Württemberg from 255 to 352 year-on-year (total length: 261 to 387 km). This is in contradiction to statements made by Deutsche Bahn, according to which the number of speed restrictions is kept constant overall. Critics also suspect a considerable number of unreported cases of temporary speed limits that have been incorporated into the regular timetables over the years. A similar study, which examined the number of speed restrictions in mid-2005 to mid-2004 in Hesse and Rhineland-Palatinate, found a decrease of 11 percent, while the length had increased by 14 percent.

Permanent speed limits are mainly set up at danger points, for example at level crossings with poor visibility, or in front of structures such as track scales and moving bridges, which require a reduction in speed over a longer period of time. These speed limits are included in the speed booklet (see book timetable ).

In the meantime, routes are usually completely signaled, so that almost every speed change contained in the directory of permissible speeds (VzG) is signaled locally. The designation of the speed indicator (signal Lf 7) as a slow speed signal is therefore misleading, since it is also in places where a higher speed than before is permitted from the signal onwards.

In train station exits, where exits are signaled both with and without speed restrictions, speed indicators (Zs 3) and speed signals (Lf 7) can also be set up together on the same mast in individual cases. The speed indicator is used to increase the speed after the previous speed limit and the speed signal to increase the speed if no speed limit was signaled on the previous main signal.

The signals for the marking of temporary speed restrictions in Austria correspond in appearance, with the exception of small differences in appearance, to the slow speed signals set up in Germany.

The permanent slow-speed areas are usually set up in curves that can only be driven at reduced speed. They are marked with speed thresholds in the route table, which is loaded in the LEA . These are indicated along the route with the corresponding speed boards. These signs are not placed within the first and last points of a station .

Temporary speed limits, mostly due to a construction site, are posted and can be viewed electronically. However, if this cannot be announced at least 72 hours in advance , a report must also be given to the driver .

If several different slow speed points are signaled one after the other on a track, the following must be observed in the case of an advance signal that indicates higher speed:

When entering a rack, the maximum speed indicated on the distant signal applies until the last car of the train has passed the entrance. The speed does not have to be reduced when exiting the rack section into an adhesion section.

See the section rack entry in the article rack railway

Former slope and speed boards of the Seetalbahn

Until the introduction of the new operating concept in December 2002, in which tram regulations are partly followed, special combined gradient and speed signs were used on the Seetalbahn .