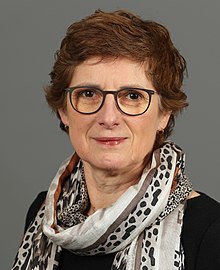 Britta Haßelmann (born December 10, 1961 in Straelen am Niederrhein ) is a German politician ( Bündnis 90 / Die Grünen ) and social worker. She has been the first parliamentary director of her parliamentary group since 2013 .

After graduating from high school for girls in Geldern , Britta Haßelmann completed a degree in social work at the Bielefeld University of Applied Sciences , which she completed as a graduate social worker (FH). Since 1985 she has been working as a social worker for the non-profit association Bielefelder Selbsthilfe eV in the areas of work, employment, psychiatry and health. From 1998 to 2000 she headed the project “Drug Addicts in Work”.

Britta Haßelmann is married and has one son.

After she had been committed to the Greens since 1989, Britta Haßelmann also became a member of Bündnis 90 / Die Grünen in 1994. From 2000 to 2006 she was state chairwoman of the party in North Rhine-Westphalia .

Britta Haßelmann, 2019, in the German Bundestag

She has been a member of the German Bundestag since 2005 . Here she is spokeswoman for the Bundestag parliamentary group of Bündnis 90 / Die Grünen for demography and geriatric politics and since spring 2007 spokeswoman for local politics.

In the 2009 federal election Britta Haßelmann candidate was in the Bundestag constituency Bielefeld and is on the national list North Rhine-Westphalia in the Bundestag drawn in. During this legislative period she was one of three parliamentary directors.

After the 2013 federal election , Haßelmann was elected First Parliamentary Managing Director of her parliamentary group on October 8, 2013.