Various technical systems and operational regulations were developed as early as the 19th century to secure train journeys . Signals that permit (travel position) or prohibit (stop position) journeys for a certain route section are widespread , whereby the simultaneous authorization of enemy journeys is often largely excluded due to technical dependencies. However, signals do not have an immediate effect on the train. The engine driver must perceive them and, when approaching a signal indicating a stop or limiting the speed, brake the train accordingly. If a train driver overlooks a signal, however, it can lead to considerable hazards and serious accidents. To counter this risk, systems have been developed that intervene directly in driving operations by triggering emergency braking if necessary . The same technology can also be used to monitor the speed of the trains.

The bang capsule patented by EA Cowper in 1842 can be regarded as the first non-visual, technical device for transmitting information . Starting in 1872, the two engineers MM. Lartigue and Forest developed Crocodile, the first signal-dependent train control system based on a section-wise galvanic coupling of the locomotive and the line (see below). In 1920, with Continuous Cab Signals (CCS), the possibility of continuous influencing based on coded track circuits found its way into railway operations. The basic idea of ​​this originally American system then came via Italy ( RS4 Codici ) to the Soviet Union ( ALSN ) and to other countries of the then Comecon economic alliance . Today you can find its offshoot z. B. in the Czech Republic and Slovakia ( LS ), Hungary ( EVM ), Italy ( BACC ) and the Netherlands ( ATB-EG ). 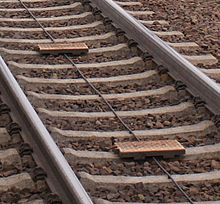 This track in Wittenberg station is equipped with both point-shaped train control (yellow Eurobalises for ETCS ) and line-type train control (cable line conductor in the middle of the track for LZB).

In Germany , railway lines must be equipped with a train control system in accordance with Section 15 (2) EBO if they

The leading vehicles ( locomotives , multiple units and control cars ) require equipment appropriate to train control ( Section 28 EBO). The infrastructure company is responsible for structuring this requirement on the track side.

Mainly three systems are used on the DB Netz routes :

Other or modified systems are used for special applications such as local transport systems ( S-Bahn , U-Bahn , tram ).

At permitted travel speeds of more than 160 km / h, the legislator prescribes train control with driver's cab signaling , since the driver can no longer reliably register outside signals . In Germany, LZB and ETCS from ETCS Level 2 are approved for this.

Other countries also believe that:

Punctual train controls only transmit the signal information to the traction vehicle at discrete points - often at the location of the line signals. Most systems are not signal-technically safe because they work according to the open- circuit principle - an exception to this is ETCS Level 1 Full Supervision. Failures of the track equipment can only be determined through special tests. Nevertheless, punctual train control offers a high increase in safety at relatively low costs.

Depending on the type of information transmission, there are or were the following types of punctual train control:

The information is transmitted before or at the stop signal by mechanical contact between the track and vehicle equipment. The mechanical train control is suitable for relatively low speeds up to approx. 90 km / h. Well-known application: train locks that were introduced in many urban rapid transit railways before the First World War and are still partially in operation.

The power is transmitted from the moving train to the track system using contact brushes or contact shoes. The power is returned via the rails . Signal transmission can be disrupted by snow and ice. Well known application: Crocodile on the French, Belgian and Luxembourg railways.

The permanent magnet or electromagnet of the passing traction vehicle induces a current when driving over a track magnet, which is short-circuited when the signal is moving. When the signal shows a stop, a second electromagnet induces a current at the receiver coil of the vehicle, which is evaluated by the vehicle equipment. This train control can only assume and transmit two states.

The optical train control (Opsi) was developed by the Deutsche Reichsbahn and tested over a long period of time. The system worked with light and was designed to secure signals in rail traffic. The aim of the system was an automatic emergency braking of the rail vehicle when approaching a signal indicating a stop. To recognize the signal information, light sources were attached to the locomotives, which direct a strong light beam forward. Movable cube-corner mirrors were attached to the signals , which stood vertical when the signal was stopped and reflected the light beam. The reflected light beam was registered on the locomotive with a contact cell. In the event of incorrect action by the driver, an emergency brake should then be triggered. This was to ensure that the train did not run over the stop signal.

For the extensive tests of this system, many signals and locomotives were equipped with mirrors and light sources. It was intended to be used across the board. However, the system did not work reliably. The mirrors were easily soiled or in bad weather the light was not recognized by the locomotive. Problems also arose when the sunlight was too strong. The Opsi project was discontinued in 1943.

Cable line conductor with a crossing point, the routing of the second cable can be seen on the left rail.

With these systems, data is exchanged between the route and the locomotive without interruption. As a result, changes in the permitted speed are immediately communicated to the vehicle, which improves the flow of operations and increases safety. Continuous transmission systems work according to the closed- circuit principle , which means that failures of the line equipment on the vehicles are recognized immediately. They cause high costs, but are indispensable for high-speed traffic. Fixed signals can be dispensed with thanks to the reliable display of the permissible speed in the driver's cab . A largely automatic driving and braking control is also possible with such systems.

Line cables enable the inductive transmission of information to the vehicle.

The signal is transmitted via an electromagnetic field that forms around the rails in track circuits . The field is scanned via locomotive receiving antennas and the information fed into the so-called coded track circuits is received.

The disadvantage is the greater electrical attenuation in contrast to cable line conductors , which means that only a small volume of information can be transmitted. Different frequencies of the coded track circuits allow the transmission of several speed levels. A stop from the maximum speed can take place over several sections, the speed levels being selected in such a way that approximately the same braking distances result to the next lower section.

For data transmission , an electromagnetic field that propagates out to a blank between the rails cable is used. At fixed intervals, e.g. B. every 100 m the cables are crossed. These crossing points can be used to determine the position of the trains. The system is characterized by good transmission properties between the route and the vehicle and vice versa. The possibility of extremely short block distances enables very short train headways to be achieved. The cable line conductors, however, are a hindrance when working on the superstructure, their removal and installation requires a significantly higher amount of time compared to the parts of the line equipment of other train control systems. They are also sensitive to damage.

The wireless technology was so advanced since the early 1990s that they for secure data transmission between fixed route centers ( Radio Block Center could be used, RBC) and motor vehicles.

A stable radio connection is a prerequisite, since in the event of an interruption or disruption, the trains can only run on sight or are dependent on a less powerful fallback level. At the beginning of the 1990s, the modern GSM standard was used in Europe. It turned out, however, that special requirements for railway applications could not be met by the existing standard. Therefore a special standard GSM-R was developed. This also became the basis of the ETCS standard. The current update of GSM-R has also included the packet-oriented transmission GPRS and EDGE as quasi-continuous data transmission in the standard. These processes can make better use of the available mobile phone frequencies and are therefore necessary for metropolitan areas and rail hubs.

Work is underway to adopt the current LTE cellular technology for railway applications.

In some countries (Finland, Kazakhstan, Russia) the TETRA standard used by authorities is used instead of the GSM standard for this communication .

The radio transmission has the advantage that no devices are required in or on the track. Furthermore, the standards are largely implemented as software that is easier to update and adapt to local conditions. However, this also has the disadvantage of the possibility of large-area disturbances in the area of ​​the logic and the power supply.

Gaps in the discrete transmission of information

A punctual train control only transmits the information to fixed points on the locomotive, where it is evaluated to secure the train journey. No information is transmitted between the transfer points (ÜP1 and ÜP2 in the picture on the right). When shortly after driving past the distant signal a speed-increasing signal aspect is activated, creates a working disability . If the signal unexpectedly changes to stop after driving past the distant signal, which is very rare, there is an operational risk . Such problems can be reduced by a continuous signal transmission following the transmission point ÜP1. Such train controls with partially continuous data transmission consist of components of punctiform train controls and a system with continuous data transmission.