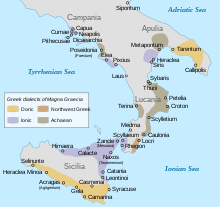 The Eleates represented one of the oldest philosophical schools of ancient Greece ( Eleatic school ). The school is named after the city ​​of Elea, founded by the Greeks on the western Italian coast . The Eleates belong to the group of pre-Socratics .

Parmenides from Elea is considered to be the main exponent of this monistic doctrine in which a single, unchangeable being is postulated.

Other well-known representatives of this philosophy are Zenon of Elea and Melissos of Samos .

According to earlier opinion, the Eleatic doctrine was adopted around 540 BC. Founded by Xenophanes in Elea, Xenophanes is no longer counted among the Eleates according to current knowledge. Previously, Parmenides was seen as a student of Xenophanes (* around 570 BC).

As Eleaticism is called "every philosophical doctrine of an absolute, goes only by thinking to be detected being and opposes him and becoming the visible world than meets the eye."