Photo collage: The Duisburg-Nord landscape park is lit up at night on weekends, but it is also one of the venues for the ExtraSchicht.

The ExtraSchicht is a one-day cultural festival in the core cities of the Ruhr area . It is also known as the night of industrial culture.

Once a year, on one night on the last Saturday in June, ExtraSchicht stages former industrial plants, current production facilities, mines and heaps as venues for industrial culture and thus illustrates the change in the Ruhr area from heavy industry to a modern economic and cultural region. 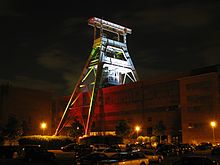 Ewald colliery during the extra shift in 2008

Imaginative productions by international artists allow the venues of industrial culture for ExtraSchicht to appear from a new perspective. At the same time, the night of industrial culture with its very special atmosphere positively boosts the image of the Ruhr area. Concerts, performances and exhibitions (special nightly openings) as well as tours of museums and industrial monuments are offered from 6 pm to 2 am .

For the "ExtraSchicht - The Night of Industrial Culture" a mobility concept is developed by the VRR every year , with which the visitors can commute quickly and easily between the venues without a car. In total, over 100 additional shuttle buses run for the ExtraSchicht. In addition, some of the S-Bahn lines in the ExtraSchicht area will be reinforced by additional trips at night. In addition, between 150 and 200 pilots will be positioned at the venues and larger stops ( main train stations , logistical hubs) to provide visitors with advice and assistance. They can be clearly recognized by their blue T-shirts and caps and give ExtraSchicht visitors information on timetables and times, as well as the program at the venues and turntables.

ExtraSchicht has been attended by an average of 100,000 to 150,000 spectators in recent years, making it an important contribution to the application of the Ruhr area as the European Capital of Culture 2010. In the Capital of Culture year, ExtraSchicht took place on June 19, 2010. Around 200,000 people were out and about in the Ruhr area under the motto "The Capital of Culture's Summer Festival". In 2018, according to the organizers, around 300,000 visitors visited the 50 venues in 22 cities. In 2019, the number of participating cities increased to 24.

The organizer is Ruhr Tourismus GmbH. The project partners are the Ruhr Regional Association , the Rhein-Ruhr Transport Association and RUHR.2010 GmbH.