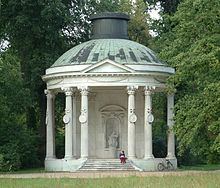 The friendship stamp is a small round temple in the western part of the Sanssouci Park in Potsdam , which the Prussian King Friedrich II had built in memory of his favorite sister, Margravine Wilhelmine von Bayreuth , who died in 1758 . Near the New Palais , south of the main avenue, Carl von Gontard created the pavilion between 1768 and 1770 as a counterpart to the temple of antiquities located in an axis north of the avenue .

The first pavilion in Neuruppin 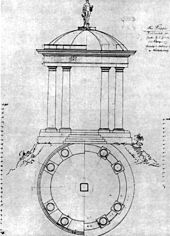 Temple of Apollo in Neuruppin

The temple of Apollo in the Amaltheagarten in Neuruppin served as a model for the friendship temple . The first work by the architect Georg Wenzeslaus von Knobelsdorff was created in 1735 in an ornamental and kitchen garden that Crown Prince Friedrich (the Great) had laid out at his Neuruppin residence, where he was in command of a regiment from 1732 to 1735.

The Temple of Apollo was an open round temple, which was closed in 1791 by bricking up the spaces between the pillars. In August 1735 Friedrich wrote to his sister Wilhelmine: “The garden house is a temple made up of eight Doric columns that support a dome. On top of it stands the statue of Apollo . As soon as it is finished, we will make sacrifices - to you, of course, dearest sister, as the protector of the fine arts. "

The pavilion in Sanssouci Park

As in Neuruppin, Frederick the Great chose the architectural style of the open round temple for the place of memory of his favorite sister, the flat arched roof of which is supported by eight Corinthian columns arranged in pairs . This form, typologically a monopteros , has its origin in ancient Greece, where such canopies were erected over cult statues and tombs.

An apotheosis of Wilhelmine von Bayreuth means her representation as a larger-than-life seated statue in a round arch niche on the narrow rear wall surface. Her bare foot rests on a four-legged stool and invites you to worship, following the example of ancient statues of gods. The head leans graciously towards the viewer, the book resting on the lap stands as an attribute for the protector of science. The statue comes from the workshop of the sculptor Johann Lorenz Wilhelm Räntz . A painting by the portrait and court painter Antoine Pesne served as a template for the marble figure . The medallions on the pillar shafts with portraits of friendship couples from antiquity and the book in her hand indicate the Margravine's enthusiasm for this age. "The juxtaposition of virtuous male friendships with Wilhelmine expressed the greatest appreciation that the king ever showed a woman."