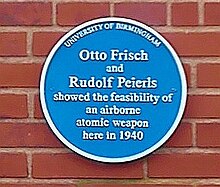 Memorial plaque at the University of Birmingham. Translated:
Otto Frisch
and
Rudolf Peierls
showed the feasibility of an atomic weapon
dropped from the air here in 1940

The Frisch-Peierls-Memorandum was a memorandum written by the physicists Otto Frisch and Rudolf Peierls in March 1940 in Birmingham on the possibility of building a “super bomb” by utilizing the energy released by nuclear fission. Frisch and Peierls, who had both fled abroad before the National Socialist regime, were largely driven when writing their memorandum by concerns that a nuclear weapon might be developed in Nazi Germany and tried to warn the British government. The memorandum is seen as an important step on the way to the first atomic bomb . Frisch and Peierls gave the memorandum under the seal of strict secrecyMark Oliphant , who in turn passed it on to Henry Tizard , a senior Air Force officer. As a result of the memorandum, there were first activities in Great Britain with regard to research and construction of an atomic bomb and the MAUD commission was established. 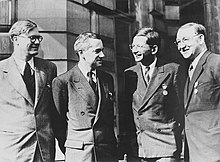 Otto Frisch was born in Vienna in 1904. He came from a musically and scientifically gifted family and his aunt was the physicist Lise Meitner . He studied at the university in his hometown and after completing his studies worked in various scientific institutes in Germany, most recently with Otto Stern in Hamburg until 1933 . Rudolf Peierls was born in Berlin in 1907, studied at the Friedrich Wilhelms University and then worked at various universities on problems in the field of solid state physics . Both fresh and Peierls came from Jewish parents houses and two was after the seizure of the Nazis in 1933 realized that they have no prospects as a scientist more at German universities would. Peierls initially stayed in Cambridge, where he worked on a Rockefeller Fellowship , and was finally appointed Professor of Physics at Birmingham University in 1937 . In 1933 Frisch emigrated from Hamburg to London, where he found a job at Birkbeck College and worked for Patrick Maynard Stuart Blackett on problems in the field of radioactivity. From 1934 to 1939 Frisch worked at Niels Bohr's institute in Copenhagen with questions relating to nuclear physics . 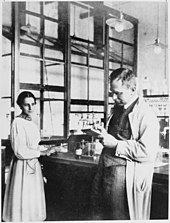 Lise Meitner and Otto Hahn in Berlin (around 1925).

For many years Lise Meitner worked as a research assistant to Otto Hahn at the Kaiser Wilhelm Institute for Chemistry in Berlin and played a decisive role in Otto Hahn's research results. Although she was of Jewish descent, she was initially able to continue working after 1933, because she had Austrian citizenship and was therefore considered a foreigner and was not subject to the provisions of anti-Semitic legislation. This situation changed suddenly in 1938 after the annexation of Austria and Meitner was forced to emigrate to Sweden. At Christmas 1938, her nephew Robert Frisch visited his aunt in Kungälv , Sweden. There Meitner talked about Hahn's latest results in Berlin, with whom she was still in lively correspondence. Otto Hahn and Fritz Straßmann subsequently found the element barium while bombarding uranium with neutrons , but were initially unable to interpret this result. In their discussions in Kungälv, Frisch and Meitner came to the hypothesis that the uranium must have been fissioned by the neutron bombardment. After he returned to Copenhagen, Frisch immediately set about verifying Hahn's experiments. Frisch and Meitner calculated that an enormous amount of energy was released in relation to the mass used during nuclear fission, and published their results in 1939 a few months after the publication by Hahn and Straßmann.

Conclusion of the memorandum

In the summer of 1939, Frisch traveled from Copenhagen to Birmingham. The trip was only planned as a short visit, but Frisch was surprised in England by the outbreak of the Second World War , so that he could not return to Denmark. Due to the circumstances, he looked around for work opportunities in England and found a job with Rudolf Peierls, who had established himself as a German emigrant in England and Birmingham for some time. Both Peierls and Frisch were deeply concerned about the military successes of Nazi Germany on the European continent and at the same time knew the high level of German nuclear research and theoretical physics firsthand. They feared that the Nazis would exploit the potential of modern nuclear fission and that a “super bomb” could arise in the hands of Hitler. To draw attention to this danger, in March 1940 they wrote the memorandum that was later named after them.

The writing, which was marked as strictly confidential (top secret), consisted of two parts. In the first part general considerations are made about the possibility and technical realization of a uranium bomb. In the second part, detailed physical calculations follow to underpin the considerations that were initially made.

Effects of an atomic bomb explosion

In the first part, the consequences of an atomic bomb explosion are described with astonishing visionary clarity:

The attached detailed report concerns the possibility of constructing a “super-bomb” which utilizes the energy stored in atomic nuclei as a source of energy. The energy liberated in the explosion of such a super-bomb is about the same as that produced by the explosion of 1000 tons of dynamite. This energy is liberated in a small volume, in which it will, for an instant, produce a temperature comparable to that in the interior of the sun. The blast from such an explosion would destroy life in a wide area. The size of this area is difficult to estimate, but it will probably cover the center of a big city.

“The attached detailed report deals with the possibility of constructing a“ super bomb ”that uses the energy stored in atomic nuclei. The energy released by the explosion of such a bomb is roughly equivalent to the energy of 1000 tons of dynamite. This energy is released in a small volume in which it produces temperatures for a fraction of a second that are comparable to those inside the sun. The pressure wave of such an explosion would destroy all life in a wide area. The size of the affected area is difficult to estimate, but would probably encompass the center of a large city. "

The consequences of radioactive fallout and radioactive contamination of the environment are also clearly identified and described:

In addition, some part of the energy set free by the bomb goes to produce radioactive substances, and these will emit very powerful and dangerous radiations. The effect of these radiations is greatest immediately after the explosion, but it decays only gradually and even for days after the explosion any person entering the affected area will be killed.
Some of this radioactivity will be carried along with the wind and will spread the contamination; several miles downwind this may kill people.

“In addition, some of the energy released by the bomb will be released in the form of radioactive substances, and these will emit high-energy and dangerous radiation. The effect of this radiation will be greatest immediately after the explosion, but will only decrease gradually afterwards, so that people who enter the area days after the explosion will be killed by it.
Some of the radioactivity will be dispersed by the wind and spread the contamination; this can kill people many miles downwind. "

Danger of a German atomic bomb

Furthermore, the possibility that Germany could develop such a weapon is discussed:

We have no information that the same idea has also occurred to other scientists but since all the theoretical data bearing on this problem are published, it is quite conceivable that Germany is, in fact, developing this weapon. Whether this is the case is difficult to find out, since the plant for the separation of isotopes need not be of such a size as to attract attention. Information that could be helpful in this respect would be data about the exploitation of the uranium mines under German control (mainly in Czechoslovakia) and about any recent German purchases of uranium abroad. It is likely that the plant would be controlled by Dr. K. Clusius (Professor of Physical Chemistry in Munich University), the inventor of the best method for separating isotopes, and therefore information as to his whereabouts and status might also give an important clue. At the same time it is quite possible that nobody in Germany has yet realized that the separation of the uranium isotopes would make the construction of a super-bomb possible. Hence it is of extreme importance to keep this report secret since any rumor about the connection between uranium separation and a super-bomb may set a German scientist thinking along the right lines.

“We do not have any information that other scientists have also had these ideas, but given that all theoretical data on this problem are publicly available, it seems conceivable that Germany will actually develop this weapon. It is difficult to determine whether this is actually the case, since an isotope separation facility does not necessarily have to be of a noticeable size. Information about the exploitation of uranium mines that are under German control (mainly in Czechoslovakia ) and about German purchases of uranium abroad would be helpful. Such a facility would probably be made by Dr. K. Clusius (Professor of Physical Chemistry at the University of Munich ), the inventor of one of the best methods for isotope separation. Therefore, information about his whereabouts and status would provide valuable clues. It is also quite possible that no one in Germany has yet recognized that uranium isotope separation can be used to produce a super bomb. It is therefore of the greatest importance that this report is kept secret so that German experts are not led on this trail by rumors. "

The technical feasibility of a uranium bomb

The next section discusses possible technical problems in the design:

As regards the reliability of the conclusions outlined above, it may be said that they are not based on direct experiments, since nobody has ever built a super-bomb yet, but they are mostly based on facts which, by recent research in nuclear physics, have been very safely established. The only uncertainty concerns the critical size for the bomb. We are fairly confident that the critical size is roughly a pound or so, but for this estimate we have to rely on certain theoretical ideas which have not 'been positively confirmed.

“As far as the reliability of the above statements is concerned, it must be said that they are not based on experiments, as no one has ever built such a super-bomb. But they are largely based on facts that have been confirmed with great certainty by recent research in nuclear physics. The only uncertainty concerns the critical size of such a bomb. We are fairly certain that the critical size is about half a kilogram, but in making this estimate we have to rely on certain theoretical considerations that have not yet been "positively confirmed". "