This article covers the Christmas carol. For the 3rd Sunday in Advent, see Advent Sunday . 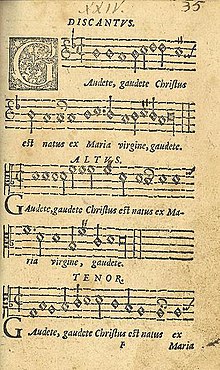 Gaudete ( rejoice! ) Or Gaudete, Christus est natus ( rejoice, Christ is born ) is a Christmas carol that has been handed down from the 16th century . It celebrates the incarnation of God in Jesus Christ . It is included in the Finnish-Swedish song collection Piae Cantiones published in Greifswald in 1582 .

The interpretations of the song range from medieval music to classical choral and instrumental music to pop music. The British folk rock band Steeleye Span had a chart hit in 1972 with an a cappella version. The synth pop band Erasure released the song as a single in 2013. Furthermore, the band Saltatio Mortis released the song in 2015 as a bonus track for their album Zirkus Zeitgeist .