Dedicated graves of the city of Vienna 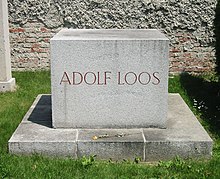 Plaque "Honorary Grave of the City of Vienna" 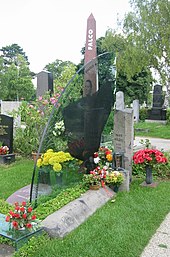 Honorary grave of the singer Falco

Dedicated graves of the city of Vienna (also: dedicated grave sites ) is the generic term for graves dedicated to honor, which are located in different cemeteries, and so-called honor graves, which are created exclusively in the central cemetery.

The establishment of honorary graves was the successful attempt by the City of Vienna to make the central cemetery in Simmering , which opened in 1874, more attractive to the population.

In 1880 the Vienna archive and library director Karl Weiß was commissioned to locate the graves of deserving and famous personalities in Vienna and the surrounding area, so that they could be reburied in graves of honor in the central cemetery. Franz Freiherr von Uchatius was one of the first personalities to be entered in the "Grave Book" created by Weiß .

Honorary graves were established from 1885. With the considerable increase in the course of the following decades, so did the costs, which in 1954 prompted the City of Vienna to introduce not only “honorary graves” but also “honorary graves”, which should put less of a burden on the budget. The third category dedicated to graves, which was introduced at the time and was only awarded for 10 years, was abolished in 1978.

Additionally there was over time

The allocation of dedicated graves falls within the competence of the Vienna Cultural Office ( Municipal Department 7). Resolutions in this regard are made by the “Honorary Advisory Board” established in 1965, in the last instance the mayor.

In October 2003 the Vienna City Council decided to set up a commission to record all grave sites and to scientifically review the dedications of honorary graves made during the National Socialist rule in Austria between 1938 and 1945. In addition, the commission also checked those graves that were dedicated to honor. In addition to the 13 graves of honor in the period in question, 76 more graves were added.

In the course of its research, the commission found that, irrespective of their activity by the responsible bodies, the burial sites of

The results of this commission include the findings that in the years before 1938, despite great achievements, and after 1945, resistance fighters and Nazi victims were hardly taken into account.

A commission set up by City Councilor Andreas Mailath-Pokorny in June 2011 reviewed the grave dedications of the Vienna City Administration from 1934–1938.

It was found among other things

One of the results of this commission was the implementation of its proposal to re-introduce the category “historical burial place”.

Commons : Graves of honor in Vienna  - Collection of images, videos and audio files