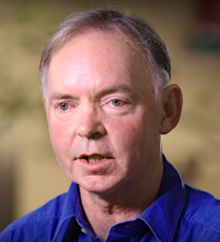 Graham Douglas Farquhar (born December 8, 1947 in Hobart , Tasmania ) is an Australian plant physiologist and biophysicist who is particularly concerned with the biophysics of photosynthesis .

Farquhar grew up on a farm. He studied at the Australian National University (ANU) with a bachelor's degree in 1968 (B. Sc.) And at the University of Queensland with a bachelor's degree in biophysics in 1969. He received his doctorate in 1973 from the Australian National University. As a post-graduate student , he was at Michigan State University's Plant Research Laboratory , where he stayed until 1976. He was then a Research Fellow at the ANU, from 1980 Senior Research Fellow and Fellow and from 1988 Professor. In 2003 he became a Distinguished Professor.

Farquhar develops process-based models for photosynthesis in plants that make it possible to predict the exchange of carbon dioxide between plants and the environment, which is important for research into climate change. He also developed models of the distribution of the stable isotopes of carbon and oxygen during photosynthesis and transpiration . He studied the effects of climate change on crops, including the development of wheat varieties that require less water.

In 2018, he was named Senior Australian of the Year for his contributions to protecting food supplies in the face of climate change.