The following important information is missing from this article or section:
See the Portuguese or English language WP for further expansion.
Help Wikipedia by researching and pasting it . 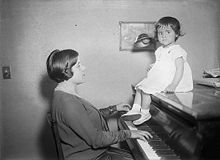 Guiomar Novaes at the piano with her daughter Anna Maria Pinto, ca.1924

She played the piano at the age of eight. With a scholarship, she was able to complete her studies at the Paris Conservatory with Isidore Philipp , where she received first prize in 1911. She made her debut in the United States in 1916 . Since 1922 she was married to the composer Octavio Pinto .