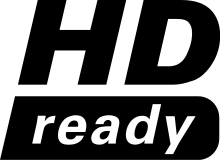 HD ready [ eɪtʃdiː ɹɛdi ] ( Engl. "Ready for HD") is one of the European Information, Communications and Consumer Electronics Industry Technology Association (EICTA) in early 2005 created a label for devices that high definition television ( HDTV can play). The “HD ready” logo is currently the only cross-manufacturer seal in Europe that identifies a minimum configuration for HDTV equipment.

The receiving part is not taken into account. The HDTV signal comes from an external set-top box (HD-STB) via the inputs mentioned, which are designed as connection sockets, to the display part. The seal only applies to a limited extent to devices that combine a screen and an HDTV receiver ("HD IRD") (as is the case with analog antenna and cable television). For these combined and pure receivers, the EICTA also has the similar-looking “HD TV” logo.

World map showing the use of frame rates in HDTV. Thanks to the “HD-ready” label, signals from 60Hz countries can also be displayed unchanged. (Status: 2006)

Before the logo was introduced, there were two general problems with HDCP copy protection:

This led to the fact that the HDCP capability of screens, which is vehemently demanded by the rights holders, was in fact not given.

The stated requirements are apparently intended to equip the buyer for all eventualities in order to strengthen confidence in the technology. The new logo should probably raise awareness: Anyone who wants to watch high-resolution television or video in the future needs a device that is HD-ready. For this, increased production costs are also accepted.

It is not certain that Europe will continue to have only 50 Hertz broadcasts and media, and both 720 and 1080 line formats can be used. Hence the need to support four formats (720p50 / 60, 1080i50 / 60). The logo has so far often been refused to display devices that have either been advertised as HD-capable

Existing sources often used analog interfaces for transmission, but digital processes are increasingly being used that make the potentially quality-reducing digital-analog-digital conversion superfluous, which is why the logo requires both. The HD-STBs ( DVB , HD DVD , Blu-ray , game consoles, etc.) require HDCP copy protection for non-quality images if there are corresponding DRM control instructions in the data stream (e.g. broadcast flag ). HDCP only works via digital interfaces. Many display devices with DVI input were previously u. a. not equipped with such copy protection support for cost reasons, but "HD ready" expressly requires this capability. HDMI, which uses a different, smaller connector than DVI, but is protocol-compatible with this, always requires HDCP.

The EICTA standards for HDTV are based on analogue component signals in either RGB or YPbPr coding. The rights holders in the film industry actually want to bypass these standards because of the lack of copy protection via HDCP. Therefore, the new or planned offers for high-definition television or video content can often only be found in connection with the letter combination “HD” for “high definition”, but not as “HDTV” offers.

A licensee received the right to use the logo with up to three brands for an annual fee of EUR 1000 (in the first year 2000). Only the manufacturer was responsible for ensuring that devices labeled in this way actually complied with the specifications. An examination by the EICTA did not take place, but third parties (e.g. professional journals) used the criteria for their tests. Several violations of the license conditions have already become known, but they did not result in any fines. Although it has not yet been clarified in court, it can be assumed that failure to meet the requirements associated with the seal entitles the customer to withdraw .

Copy protection critics accuse the EICTA of wanting to create the basis for its broad introduction with the requirement of HDCP , which in turn creates the basis for Digital Rights Management (DRM).

Future receiving and playback devices will output no or only qualitatively reduced video and audio signals via other outputs (analog or unprotected digital) depending on the DRM specifications. This would mean that existing devices without HDCP, which do not conform to "HD ready", would receive U. worse signals than they can actually display or in extreme cases none at all.

The availability of display devices with HDCP capabilities allows broadcasters to use a so-called broadcast flag to activate HDCP if the receiver has a set-top box that can process this signal. Thus, the German has pay-TV broadcaster Premiere be Premiere HD tied in early 2006 called channels available on the condition that next to a (for the broadcast flag receptive) HD receiver to the "Premiere HD" certification for the video output, a TV with the HD ready logo is required. The channel Anixe HD , which was launched in May 2006 , also uses the same control options as Premiere to use a broadcast flag to force the Premiere HD-compatible receiver to activate HDCP encryption and to downscale the analog video outputs to PAL. The MPEG-2 HD channels Sat.1 HD and ProSieben HD, which have since been re-established, broadcast in 2006 without HDCP activation, but were only rarely given HDTV transmission rights. The British pay TV provider Sky HD also offers HDTV channels that reduce the signal quality of analog video outputs and activate HDCP.

The quality of the deinterlacers required for this is not specified by "HD ready", neither for 1080i nor for the SDTV resolutions 576i50 and 480i60 . Some critics believe that this should have happened, as many devices reveal weaknesses here. However, this would require complex and subjective test procedures which, like all other criteria, are not either met or not easily verifiable.

The support of full-screen signals with 1080 lines (1080p) and cinematic 24 Hz or 25 Hz is not explicitly required (see also "Full HD Ready"). There is with progressive with segmented frames (psF) Although a compatible to 1080i method to transmit one frame as two fields with the same time index, but the presentation of the logo is a recognition of this method based on progressive display devices only the simplest form of Deinterlacings (weaving) are also not required, so that some compliant devices could perform unnecessarily complex interpolations that reduce the quality instead of improving it.

It is not checked regularly whether the manufacturers adhere to the required specifications. It therefore does not correspond to an independent test seal, but relies on self-monitoring by the manufacturer and the customer as well as the specialist press. The “HD ready” label has no official or legal status. Several manufacturers and dealers have already been noticed who label devices with the “HD ready” logo, which do not meet the minimum requirements.

Commonly used logo before the introduction of HD ready 1080p

EICTA introduced an additional label on August 30, 2007. The new logo corresponds to the “HD ready” logo and has been extended by a third line with the text “1080p”. Many manufacturers have already introduced their own labels such as "Full HD", but since it is the opinion of the EICTA not a " Full HD " is (full would be a finite term), this became "HD ready 1080p".