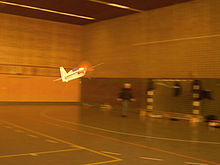 Indoor flying with a shockflyer in a handball hall

The motivation for indoor flying and the machines used are very different. In the beginning it was a revue attraction. For aircraft and model builders, it has always been a technical challenge to miniaturize all aircraft components to such an extent that the aircraft can be operated safely in closed rooms. For the smallest aircraft, flying in closed rooms is simply a necessity, because they can only be operated safely in still air. The Fédération Aéronautique Internationale (FAI) has defined special indoor flight aircraft classes for the correct documentation of indoor flight performance.

The classic hall flight branch of model flight can only be operated in closed rooms due to the low weight of the models . International class F1D flight models have a maximum wingspan of 55 cm with a wing depth of 20 cm. The fuselage is about 80 cm long and propulsion is created by a propeller with a diameter of up to 48 cm and a rubber motor . F1D aircraft must weigh at least 1.2 grams without the powertrain. The goal is the maximum flight time of the machines; the records are over 3600 seconds (= 1 hour). The machines fly very slowly and have no remote control . To avoid collisions, the flight direction may be corrected manually.

In the field of remote-controlled model aircraft, indoor flying is primarily the operation of slow flyer and shock flyer models in normal sports halls (standard indoor handball pitch ). The models are characterized by good slow flight and / or maneuverability and often have propeller thrusts that can let the model shoot up vertically with a thrust ratio of up to 3: 1. They usually weigh 90 to 220 grams ready to fly with a wingspan of around 60 to 90 cm.

Due to the miniaturization of important model flight components, the use of new materials (e.g. Depron ) and the improved energy density of accumulators in the 1990s, special indoor flight models were developed that make model flight and 3D aerobatics possible in the hall. Many model aircraft sports clubs have further developed their activities in this area because it enables regular active flight operations in the winter half-year.

In the classic indoor class F1D, its predecessors and later classes derived from it, there have been competitions and record records for many decades.

For remote-controlled flight, the two German model flying umbrella associations DMFV and DAeC have jointly organized German Indoor Aerobatics Championships in the sports class (F3AI-B), expert class (F3AI-A) and since 2003 in the AeroMusical class (F3AI- AM) aligned. Multiple German champion was Martin Müller, who incorporated his indoor flying experience into the development of the Shock Flyer. 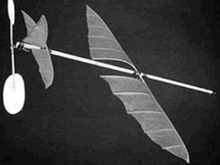 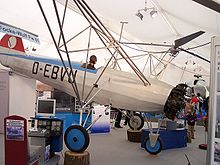 The rubber-motorized model airplane Planophore with a 45 cm wingspan, created by Alphonse Pénaud in 1871 , was the direct forerunner of today's F1D indoor airplane class and was sold in significant numbers as a toy at the end of the 19th century.

Hanna Reitsch caused a sensation with the first indoor helicopter flight in 1938 when she flew in a Focke-Wulf helicopter (Fw 61) in the Berlin Deutschlandhalle as part of the Ki sua heli revue .