A backlight (English backlight ) is used in liquid crystal screens and displays . The light is absorbed to different degrees by the individually controlled liquid crystal cells arranged in front of it, which creates the impression of a self-luminous image.

In connection with liquid crystal displays (LCD), internal lighting was used for the first time in electronic pocket calculators from North American Rockwell , USA, which were sold under various brand names such as IBICO 086 or Lloyds 40 from 1972. This was not yet the backlighting that is common today for LCDs, because these first LCDs used Dynamic Scattering Mode (DSM); the liquid crystal display was transparent in the idle state and became milky opaque when an electrical voltage was applied. In order to improve the readability of these LCDs, a white light source, invisible to the viewer, was attached above the display, which generated light falling at an angle on the back of the display, so that the activated digit segments only appear as bright on a dark background when the light is scattered became visible.

After Twisted Nematic LCDs had replaced the Dynamic Scattering Mode LCDs , these purely reflective displays, which work with ambient light, were also difficult to read when there was little or poor ambient light. This was particularly the case with the digital wristwatches with TN-LCDs that were now emerging in the twilight or at night, because liquid crystal displays themselves do not generate any light, but only let through or block the incident light.

After preliminary work at the pharmaceutical company Roche in Basel and in the research center of Brown, Boveri & Cie (BBC), Baden, TN-LCDs were mainly manufactured for wristwatches in large series from 1974 in a newly built factory in Lenzburg (Switzerland). Backlighting techniques were developed in the associated application laboratory under the direction of Peter J. Wild . The result of this work was a backlight for wristwatches with a point light source arranged on the side and a plastic light distribution plate. The light distributor was given special coatings and placed behind the liquid crystal display for lighting at the push of a button. Comparable arrangements are now known as edge-lit in LED televisions , whereby, in contrast to wristwatches, the background lighting is constantly necessary because the liquid crystal display is operated exclusively in transmitted light.

To monitor industrial processes, built-in measuring instruments with a vertical display surface are used in so-called control rooms . With this type of ambient light, purely reflective TN-LCDs, as shown in the illustration on the left, are rather difficult to read. For this reason, in the 1970s BBC developed an arrangement with a fluorescent tube (cold cathode tube of the CCFL type) as a light source and a diffuser as a light distributor for backlighting a TN-LCD in transmitted light, which can be seen on the right-hand side of the figure and was extremely easy to read .

From the 1990s, such lighting arrangements with cold cathode tubes were generally used to operate colored LC flat screens , before alternatives with LEDs as light sources for LED televisions were developed and have been preferred since about 2011. 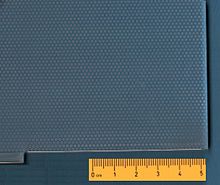 Targeted inhomogeneous extractor size (diameter of the bright points) on the acrylic plate (6 mm thick) of a TFT, CCFL on the right

The light emitted by point or rod-shaped light sources must be distributed as evenly as possible over the surface. With relatively small areas, the light is often fed in at the end of a light guide . In practice, the light guide is a flat plate made of a transparent plastic such as acrylic glass . This contains extractors that couple the light out of the light guide. The decoupling can be realized by scattering structures distributed in the light guide material, targeted fine surface structures or fine, printed patterns. The inhomogeneous distribution of the decoupling structures has the effect that the uniform illumination of the surface also z. B. is achieved with only one frontally irradiating cold cathode tube. To increase the luminance, the light sources can also be attached to two or all four end faces. Background lighting based on this principle is called edge-lit backlight .

As the size of the light source increases (and the aspect ratio remains constant , e.g. 16: 9 ), the sum of the side lengths only increases proportionally to the length of one side, while the area increases as a square. Since the output of the light sources cannot be increased arbitrarily, the edge-lit backlights are limited here in principle. For larger formats, designs are used that are derived from the well-known light boxes. The light sources are located in a flat tub, which diffusely reflects the light inside and only lets it out on the open side. Specially shaped reflectors are often used for fluorescent lamps and diffuser lenses are used for LEDs, so that the light emerging from the light trough is approximately homogeneous despite the small depth of the background lighting. Remaining inhomogeneities in the illumination become noticeable in the form of cloudy representations (English clouding ).

From the company 3M z. B. developed the so-called Vikuiti films, which utilize the light better by a factor of two compared to an opal diffuser. These foils reflect those light components back to the light guide that are unsuitable for backlighting the LCD in terms of direction and polarization . This light is scattered in the light guide, mixed in the direction and polarization and then reaches the LCD again. Similar to a geometric row , the process is repeated and leads to better utilization of the light.

The flat, luminous electroluminescent film (EL film) was mainly used in clocks until around 2008, there mostly in blue or blue-green tones. Due to the high voltages (approx. 200 V) required for control, their very low efficiency compared to LEDs today or LEDs that have been available since 2008, it no longer plays a role as background lighting in such simple displays. It was never used as a display backlight due to its low luminance, low long-term stability and low efficiency compared to CCFL tubes.

The compact and efficient cold cathode tubes (fluorescent tubes) provide a better light yield compared to the EL film. To illuminate a larger area, several of them must be installed parallel behind the image area. A diffusing film then distributes the light from the tubes over the image surface. The desired uniform light distribution can only be achieved by a minimum distance to the image surface, which means that screens with cold cathode tubes must have a minimum depth of about 35 mm. The diameter of the tubes themselves cannot be reduced at will either. In the example in the picture the diameter is 3 mm. In addition, relatively high electrical voltages and powers are necessary.

The use of many small point sources in the form of light-emitting diodes (LEDs) as background lighting has the advantage that their brightness can be specifically controlled. By deliberately reducing the background lighting in darker image areas (technical jargon local dimming ), the overall image appears richer in contrast and the brightness difference between the darkest representable black and the brightest white is improved. At the same time, however, the achievable brightness value within the darkened areas is significantly reduced, so that z. B. bright highlights in dark areas are also darkened. This problem is countered by an increasing number of LEDs for backlighting, which, however, drives the price of the devices up significantly, because the increase in the number of LEDs requires more complex electronics to control them. These LED arrangements are referred to in technical jargon as full-array or direct LED .

Instead of several LEDs on the side, an elongated light source is being developed by the Swiss start-up Light Efficient SystemS (LESS) , which promises more even side lighting with lower energy requirements. Light is distributed in a wafer-thin fiber with a novel nanostructure. The LESS company was selected by an independent jury as the best of 100 Swiss start-ups in 2015 and 2016.

In very simple liquid crystal displays, small light bulbs or small glow lamps are used, the light of which is scattered towards the viewer via a structured and reflective background. In theory, a Planon lamp from Osram can also be used for backlighting, but this has not caught on in the mass market because of the high price and the comparatively thick design.

The principle of backlighting is u. a. also used in illuminated advertising to produce self-luminous logos , lettering or photographic images. Further examples are backlit doorbell and name plates as well as house numbers. Here too, fluorescent tubes are mostly used, but occasionally light-emitting diodes or incandescent lamps are also used. The ultraviolet filtering or UV resistance of the materials and motifs is of particular importance here, as the service life is much longer than that of electronic devices.

Light tables and boxes for viewing image and developed film material also work on the principle of backlighting.