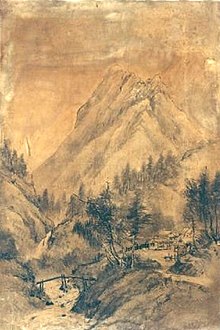 Takashima was a forester by trade and wrote a series of articles on Japanese flora and agriculture . The Japanese Ministry of Agriculture sent him to Nancy for further training , where he took courses at the local forest school from 1885 to 1888. Interested in painting, which he had already done in Japan under Ōba Gakusen (大 庭 学 僊; 1820 1899), he made friends with numerous artists from the Nancy School in Nancy , including Ernest Bussière (1863-1913), Emile Gallé , Victor Prouvé and René Wiener (1855–1939). He began to paint, and in 1886 an exhibition was dedicated to him in the window of Wiener. The following year, Takashima attended the Nancy Fine Arts Salon. He particularly influenced certain works by Louis Hestaux (1858-1919) and that of Nancy-born Camille Martin (1881-1998), as they were very receptive to Japanese art . After a last stay in Nancy in 1889, Takashima resigned from his office in 1899 to devote himself exclusively to painting.

In Japan he was a member of the committee of the "Nihon Bijtsu Kyōkai" (日本 美術 協会). After 1908 he was a juror for the Nihon Bijutsu Tenrankai Ministry of Culture's exhibition series.