Housing and Development Board 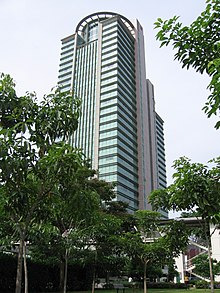 Shortly after becoming self-governing in 1959, Singapore faced severe housing shortages; low construction rates and massive damage from the Second World War exacerbated the pre-war housing shortage. In 1947 a British Housing Committee Report found that Singapore has "one of the worst slums in the world - a shame for a civilized community". The average population density in 1947 was 18.2 inhabitants per building, high-rise buildings were rare. An HDB paper in 1966 estimated that 300,000 people lived in occupied buildings in the suburbs and 250,000 in unsanitary shops in the city center. During the 1959 election campaign, the People's Action Party (PAP) realized that housing needed urgent attention and promised to provide affordable housing for the poor if they choose. When the PAP won the elections and formed Singapore's first government, it also took action to address the housing shortage. The government passed the Housing & Development Act of 1960, which replaced the existing Singapore Improvement Trust with the Housing & Development Board.

Under the direction of Lim Kim San , the HDB made building as many inexpensive residential units as possible a priority when it was founded. The originally built apartments were mainly intended to be rented to the low-income population. The Home Ownership for the People Scheme was also introduced to enable this group of people to buy their homes instead of just renting them. The new regulation also served as a hedge against inflation and financial security for homeowners. Later, the Singaporeans were also able to use their money from the Central Provident Fund for down payments. However, these efforts were not successful enough to convince the residents of the squatter settlements to move into the HDB apartments. Only later, after the Bukit Ho Swee Fire of 1961, did the efficiency and seriousness of the help from HDB convince the people. After the fire that left around 16,000 people homeless, the HDB built 8,000 apartments for the victims of Singapore's largest fire to date in just four years.

The HDB estimated that an average of 147,000 residential units would have to be built between 1960 and 1969 - 80,000 due to the current shortage, 20,000 due to the redevelopment of the city center and 47,000 due to population growth . This corresponds to an average of around 14,000 apartments per year. However, the private sector has only been able to provide around 2,500 a year. And that at prices that were beyond the reach of the low-income population. Up to 51,031 residential units were built by the HDB between 1960 and 1965. Due to Singapore's lack of land, high-rise apartments were chosen.

The policy of the HDB largely followed the line of the Singaporean government: This promoted social cohesion and patriotism within the country. In 1968, citizens were allowed to use their Central Provident Fund to buy and own the houses they rented. In doing so, they were given part of the land, which was intended as an incentive to work hard.

In 1989 the Ethnic Integration Policy (EIP) was introduced to promote integration. In order to avoid social stratification and ghettos that lead to social conflict, the apartments of different ethnic and income groups are mixed. The key to the distribution of the groups is based on the proportion of the total population of Singapore.

In the 1990s, the HDB concentrated on modernizing existing old apartments and installing new facilities such as elevators, which also stop on each floor. “Studio apartments” (one-room apartments) were built especially for the needs of senior citizens in Singapore's aging society.

On July 1, 2003, the HDB construction company became HDB Corporation Pte. Ltd. (HDBCorp) privatized. HDBCorp is now called Surbana Jurong. On June 10, 2002, the headquarters of HDB was relocated from Bukit Merah to the new premises at the HDB Hub at 480 Lorong 6 Toa Payoh. The existing Bukit Merah building, known as Surbana One , became the headquarters of Surbana Jurong.