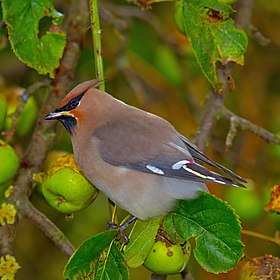 The waxwing , an invasion bird in Central Europe

An invasion bird is a bird which, under certain conditions, gives up large areas of population and instead appears in other, often distant, regions.

The invasion in one area is always connected with an evasion from another area. Evasion is triggered by high population density and a simultaneous lack of food. This condition is often given after the breakdown of a mouse gradation . A well-known invasion bird is the waxwing ( Bombycilla garrulus ), whose food base during the winter season is heavily dependent on the availability of rowan berries ( mountain ash ). If there is a lack of this food, very large swarms can form and migrate to distant areas. The mysterious occurrence of the waxwing schools in Central Europe has often caused earlier generations to see in them the omen of bad events; the waxwing is still called "plague bird" in Dutch.

Ernst Jünger refers to this at the beginning of his book An der Zeitmauer .