This article deals with a historical event. For the English NWoBHM band, which was named after it, see Jameson Raid (band) .
Jameson Raid

The Jameson Raid (German roughly: "Jameson Raid") was an attack by irregular pro-British units on the South African Republic (Transvaal). It was planned by Cecil Rhodes , led by Leander Starr Jameson , and lasted from December 29, 1895 to January 2, 1896. The intention was to support a revolt of mainly British foreign workers in the Transvaal from the Cape Colony and eventually the area to the British To annex territory. The raid failed, but it was an important step in the Second Boer War .

The raid subsequently triggered an international crisis: Wilhelm II personally congratulated President Transvaals Paul Krüger on his victory with the so-called Krüger telegram , which led to a nationalistic wave in both the German Empire and the United Kingdom and greatly alienated both countries .

The South African Republic was inhabited by about 30,000 Boers at that time . In addition, around 60,000 Uitlanders ("foreigners") lived in the country, mainly British and Germans who were active in the mining industry. In order to counteract this demographic imbalance as well as possible British property claims (the South African Republic had been under British administration as early as 1877–1881), the Boer government passed laws that denied the Uitlanders political and economic equality. This led to considerable dissatisfaction, particularly among the British Uitlanders. This culminated in the planning of a coup to overthrow the Boer government. The political leadership of the Uitlanders was the Reform Committee in Johannesburg .

Part of the plan was the stationing of pro-British military units on the border from Bechuanaland to Transvaal , which should quickly come to the aid of the Uitlander uprising. For this purpose, an area of ​​around 65 km² was acquired near Pitsani north of Mafeking . The units were subordinate to Leander Starr Jameson, the head of administration of Southern Rhodesia . The force was around 600 strong: 400 members of the Matabeleland Mounted Police and 200 militants . The armament consisted of rifles , six Maxim machine guns and three pieces of light artillery .

The aim of the Jameson Raid was to march on Johannesburg and support the coup that was to take place at the same time. The raid was planned by the Prime Minister of the Cape Colony, Cecil Rhodes , in mid-1895 . The campaign was financed primarily by the German-British Alfred Beit and other Randlords . However, there were soon considerable delays in the implementation. 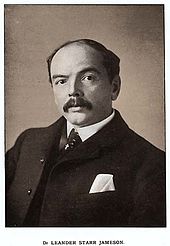 Frustrated by the delays, Jameson decided to act on his own. He sent a telegram to Rhodes informing him of his intentions and on December 29th with his troops crossed the Transvaal border in the direction of Johannesburg. British Colonial Secretary Joseph Chamberlain , although sympathetic to the raid's objectives, was dissatisfied with the timing. He instructed the Cape Colony Governor General to distance himself from Jameson's action and warned Rhodes that the mining licenses would be in jeopardy if it became public that the Cape Colony Prime Minister was involved in the raid. All British colonists were instructed not to support Jameson. 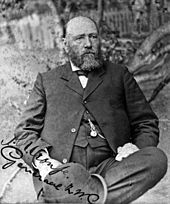 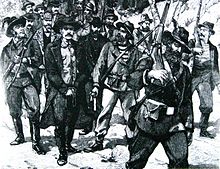 Jameson is captured on January 2, 1896, drawing in the Petit Parisien

Jameson encountered initial resistance when a brief exchange of fire broke out with a Boer outpost on January 1st. At lunchtime he met another small Boer unit that had dug in and blocked the road to Johannesburg. With this Jameson's troops fought a firefight lasting several hours, which cost them a few men and many horses. In the evening Jameson retreated and marched southeast to flank the Boer. The Boers followed him, however, and on the morning of January 2nd, Jameson's exhausted troops encountered stronger Boer units and artillery awaiting them at Doornkop (west of present-day Soweto ). In the firefight that followed, Jameson lost 30 men before he saw the situation as hopeless and surrendered to the Boer commander Piet Cronjé . The survivors were then imprisoned in Pretoria .

The Boer government later turned the survivors of the raid over to the British for trial. The prisoners were taken to London and the Transvaal government received £ 1 million in compensation from the British South Africa Company . Several members of the Reform Committee were sentenced to death; however, the sentences were later commuted to large fines. Jameson was charged with leading the raid in England. Meanwhile, he was hailed by the British press and public who interpreted his defeat as a victory. He was sentenced to 15 months in prison but only served five months in Holloway .

From 1904 to 1908 Jameson was Prime Minister of the Cape Colony and eventually one of the founders of the Union of South Africa .

The affair put an additional strain on the already tense Anglo-Boer relationship, which ultimately led to the Second Boer War . As a result of the failed attack, Rhodes resigned as Prime Minister of the Cape Province.

The raid was assessed by the governments of France, Germany and Russia as being controlled by the British government.

Another escalation arose from the subsequent Krüger dispatch , in which the German Kaiser Wilhelm II congratulated the President of the South African Republic Paul Kruger on repelling the attack, recognized the Boer Republic and offered its support. Relations between the United Kingdom and the German Reich , which were already undercooled at the time , reached a new low point.