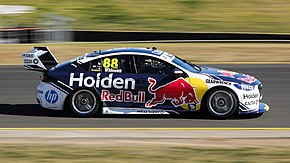 Whincup began his motorsport career at the age of seven in karting and was active in this sport until 1999. He won several championship titles. In 2000 he made his first experience in formula racing in the Australian Formula Ford . The Australian stayed in this series until 2002 and, after finishing third in 2001, won the championship title in 2002. He also competed for Garry Rogers Motorsport in two races of the V8 Supercar , an Australian touring car racing series .

In 2003 he contested the entire season in the V8 supercar for Garry Rogers Motorsport and finished 27th in the overall standings. In 2004 Whincup received no cockpit for the entire season and only took part in two races. In the overall standings he was 50. In 2005 he moved to Tasman Motorsport and took part in every race again. This season he achieved his first podium finishes in the V8 supercar in second and third. At the end of the season he finished 16th overall. In 2006 he moved to the Betta Electrical team . After having only driven a Holden Commodore before, he started in a Ford Falcon in 2006 . He won his first race in this series at the season opener in Adelaide . With another race win, he finished tenth in the overall classification at the end of the season.

In 2007 Whincup moved to Team Vodafone and became a teammate of Craig Lowndes . The Australian won five races and was runner-up behind Garth Tander . In 2008 Whincup stayed with Team Vodafone and secured his first championship title in the V8 Supercar with 16 wins from 35 races. In 2009 the Australian defended his title with 11 wins out of 29 races. In 2010 Whincup started again for the Vodafone team. For the first time since 2005 he drove a Holden Commodore. With nine wins, the racing driver was the driver who had won most of the races. However, it was not enough to defend the title, as he was defeated by James Courtney with 2990 to 3055 points and became runner-up.

In the run-up to the 2010 Australian Grand Prix , Whincup was allowed to do a few laps in the 2008 McLaren MP4-23 . This trip was made possible by its sponsor Vodafone , who had initiated a car swap with Jenson Button , who drove Whincups Holden Commodore.