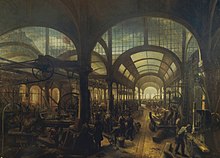 Around 1865, Jean-Louis Périn ran a large factory for woodworking and woodworking machines with around 100 employees in the Faubourg Saint-Antoine district of Paris . His employees worked there with saws or routers on wooden parts under a huge roof window. Twenty years after Eugène Philippe's model of a car wheel factory, the use of machines in ever larger factories became increasingly popular. For the in-house transport of machines and workpieces, he was already using a narrow-gauge railway with turntables in 1865, ten years before Paul Decauville used portable track yokes as a flying track for the sugar beet harvest on his estate.

Together with René Panhard , he founded the Périn-Panhard company in 1867 for the manufacture of band saws and other woodworking machines, in which Émile Levassor took over the operational management of the company from 1872 . At a new location on Avenue d'Ivry in a suburb of Paris, the company manufactured gas engines from 1875. After Perin's death, Rene Panhard and Émile Levassor acquired his shares, but kept the company name Perin, Panhard & Cie until they called the company Panhard & Levassor in 1897 .