from Wikipedia, the free encyclopedia
This is the sighted version , flagged on April 30, 2020 . There are still template and file changes that need to be viewed. 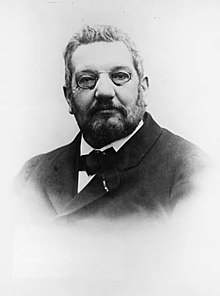 Louis François René Panhard (born May 27, 1841 in Paris , † July 16, 1908 in La Bourboule , Département Puy-de-Dôme ) was a mechanic, engineer and businessman and is considered one of the French automobile pioneers.

After completing his studies at the École Centrale in Paris, Jean-Louis Périn accepted him into his company for the manufacture of woodworking machines. As a brilliant financial and business man he put together with his engineering colleagues Emile Levassor in in Panhard ago renamed company from 1890 automobiles. After his death, the company was continued by his son Hippolyte Panhard until 1941 and by his nephew Paul Panhard from 1941 .

René Panhard was mayor of Thiais in the Val-de-Marne department since 1870 . In 1878 he was made a knight and in 1906 an officer of the Legion of Honor . The Panhard Nunatak in the Antarctic has borne his name since 1964 .