The title of this article is ambiguous. Further meanings are listed under Schulzenhof (definition of terms ) .

Schulzenhof located about two kilometers northwest of Dollgow and about four kilometers southwest of Menz in the Natural Park Stechlin-Ruppin country in the nature reserve Stechlin .

The place already existed in 1664 and was the so-called Dollgowsche Schneidemühle am Rhin . In 1731 it was repaired again, but abandoned in 1751 because of the construction of the Polzow Canal . In 1754 the place was called Dolgowsche Schneide Mühle, now Schultzenhoff for the first time with its current name. Six Büdner , each with an acre of garden land and the right to guard in the Menzer Forest, were assigned. The hereditary interest, also called Vorwerk or Rittergut , belonged to the Lindow office , from 1764 to the Zechlin office . It covered 480 acres (the acre to 180 square rods ). In 1766 the small town (" Kolonie " and Vorwerk) had 25 inhabitants. From 1754 to 1774 the estate was owned by the Schultze family. After that the owners changed quickly: from 1774 to 1780 a Herwig, 1780 a Wetzel and after this it was united with the Gut Zernikow (Großwoltersdorf) , where it remained until the end of the Second World War . In 1928 Schulzenhof, Kolonie and Vorwerk were incorporated into the Dollgow community.

In 1954 Erwin Strittmatter bought a house in Schulzenhof with his first national prize for the play Katzgraben and lived here with his third wife, the writer Eva Strittmatter . 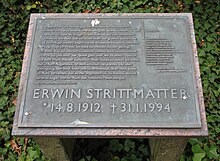 The best-known former resident is the writer Erwin Strittmatter , whose resting place is in Schulzenhof with the funeral motto "Erase my words and see: the fog goes over the meadows ...". He died on January 31, 1994 in Schulzenhof and is buried under Douglas firs across from his son Matti, who died shortly before him.

Schulzenhof is considered a literary place, about and from which the two Strittmatters wrote and also received guests from their literary environment, such as the Mongolian, German-speaking writer Galsan Tschinag (who lived with the Strittmatters in Schulzenhof for a while after his studies).

Eva Strittmatter , the widow, poet and writer, lived in Schulzenhof until her death on January 3, 2011 and was able to prevent Schulzenhof from becoming a tourist magnet for Strittmatter fans. The community had developed a complete concept: plans for a bus parking area, snack bar and a circular route with signs indicating work and life related issues. The implementation failed because of Eva Strittmatter's veto.

Districts of the community of Stechlin